The CEO of First Solar, Mark Widmar said, “I would like to thank our collaborators for their work and dedication towards the business during the third quarter.” 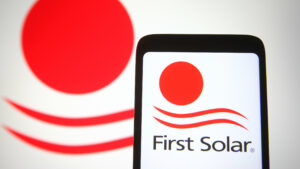 In his speech, he also stated that ” Despite many challenges in the Covid-19 environment our manufacturing unit was continued to deliver their services. In this third quarter, we produced 2.0 GW (DC) of modules. In October, we also increased our top production to 456 watts. We also started the construction of the building for our third Ohio Factory in parallel. We began ordering the equipment and necessary items for our first factory in India. Commercially, we had a great quarter. But from a financial view, we impacted in our third-quarter results.”

As company officials said, their financial results are impacted, their revenue from sales was expected to be $685 million. However, they reported $584 million. Also the decrease of $46 million of revenue from the last corresponding quarter. As it is seen that company results are down from the expectation of analysts.

Their cash, cash equivalent, and cash securities are totaled $1.9 billion at the end of the quarter drop of $111 million from the last respective quarter. The company stated that this was due to expanding in the expansion of business, capital expenditures, and reinvesting the business products and services.

About The First Solar Inc.

First Solar Inc. is an American manufacturer of Solar Panels and a provider of finance, engineered, and eco-efficient of the world’s largest grid-connected PV power plants. These are developed in Research & Developed in labs of California and Ohio. First Solar is used rigid thin-film modules for making their solar panels and as a semiconductor, it uses cadmium telluride (CdTe).