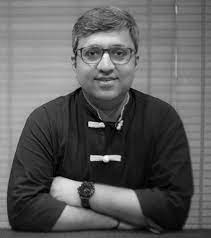 Bharat organizer Ashneer Grover on Thursday said that a viral sound bite which professes to be of him loudly manhandling a Kotak Mahindra bank representative for not getting a common designation in magnificence brand Nykaa’s first sale of stock (IPO) is “phony” and that it was a “scamster” who put it out.

“People. Chill. It’s a phony sound by some scamster attempting to coerce reserves (US$ 240K in bitcoins). I wouldn’t clasp. I have more people. Also, Internet has got enough scamsters,” Grover tweeted.

Asher Grover likewise shared screen captures of his email trade from last month with “Unicon Baba” who looked for $240,000 in return for advertising and advancement for Bharat.

The unsubstantiated clasp, tweeted on Wednesday morning by a record named “@BabuBongo”, has a SoundCloud interface with a brief snippet. “How rich originators treat helpless bank workers,” the record asserted.

The clasp, which is around 4:29 minutes, has traded between three individuals: two male voices and a female voice.

It starts with a male voice inquiring, “Howdy sir, how’re you?”

An irate male voice on the opposite finish of the supposed telephone discussion begins tossing boisterous attacks in Hindi.

“Are you tanked, sir?” the other male voice inquires.

“Are you imbecilic?” the furious voice reacts.

“No, I’m not idiotic. Yet, please sir, mind your language. I had an exceptionally lovely relationship with you and I would rather not ruin it,” says the male voice who started the discussion.

A female voice interferes with him, saying, “This is Madhuri this side… for what reason would you say you are talking like that? On the off chance that you didn’t have an allotment, why did you submit?”

Moneycontrol can’t check the genuineness of the brief snippet.

Grover is one of the financial backer specialists on the Indian variation of the worldwide business unscripted TV drama “Shark Tank” that is spilling on SonyLIV.

Grover’s fintech organization BharatPe, which he helped to establish in 2018, turned into a unicorn recently. In November 2020, he condemned Paytm boss Vijay Shekhar Sharma’s choice to “misprice” the fintech association’s public contribution, adding that a tepid reaction to the posting closes the furious pattern of IPOs in India.