Legendary investor Bill Miller told CNBC on Wednesday that bitcoin is insurance against financial disaster. Even though the cryptocurrency is trading 36% below its all-time high, Miller claimed he still has a large holding in it. He praised KPMG Canada’s decision to include bitcoin and ether on its balance sheet as a positive step. 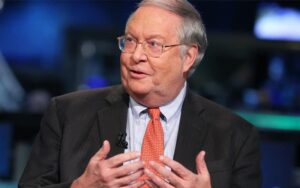 Bill Miller defined bitcoin as “insurance” against financial disaster, and he revealed that he still has a sizable position in the main cryptocurrency because it is still in its infancy.

The famed investor agreed that bitcoin has no fundamental worth, comparing the digital commodity to high-priced collectibles like Honus Wagner baseball cards or Picasso paintings.

In a Wednesday interview with CNBC, Miller Value Partners’ chairman and chief investment officer said, “It’s like an insurance policy.”

“There is no intrinsic value to insurance plans. You actually want them to have no intrinsic worth. You don’t want your house to burn down or to be involved in a catastrophic accident, but you pay for insurance every year just in case.”

“Bitcoin is insurance against financial catastrophe, as we’ve seen in Lebanon, Afghanistan, and a number of other nations around the time of the pandemic.”

Other cryptocurrency proponents, such as billionaires Mike Novogratz and Charles Hoskinson, have stated that owning bitcoin may have aided individuals in Afghanistan when the country’s economy collapsed last year following the collapse of the government.

Some commenters advised that anyone who wanted to aid Afghans donate digital assets instead of cash, as this would ensure that the monies stayed out of Taliban hands.

Miller also claimed that his words in a January interview, which were misconstrued as implying that he had put half of his personal wealth into bitcoin and other cryptocurrencies, were incorrect. He explained that he had only invested a small percentage of his net worth in bitcoin, which increased to be half of his total wealth as the price rose.

“Now it’s less than that,” he explained, “since it’s been cut in half since November.”

He said, “It’s still a very substantial job,” but did not provide any details. According to CoinMarketCap data, bitcoin was last trading 1.5 percent higher on Wednesday at roughly $44,257, but it is still down 36% from its November top of around $69,000.

“I believe you’ll see a lot more adoption among foundations, endowments, and institutions this year, and that trend will continue,” he said.