Bitcoin makes an all-time high of $47,584 after Tesla’s investment

Is Bitcoin the future currency of Earth? From what we see now it sure shot is. The largest EV manufacturer globally, Tesla has now $1.5 billion worth of Bitcoin in its balance sheet. This is after Elon Musk repeatedly said that Bitcoin is on the verge of widescale acceptance. Now that Tesla has already stepped in the cryptocurrency game, other big companies might soon join in.

After the investment Tesla made, the price of the cryptocurrency crossed the all-time high and went much beyond. At the time of writing this article, the currency is trading at $46,679 with an all-time high of $47,584. This also means that JP morgan’s analysis of Bitcoin reaching $70,000 very soon after it crosses $40,000 might also materialize. And its not just about the price increase, Tesla’s investment in the cryptocurrency makes it much more trustable for new investors. At the same time, the company plans to accept them for making purchases, which means they will also legitimize the use of the currency. 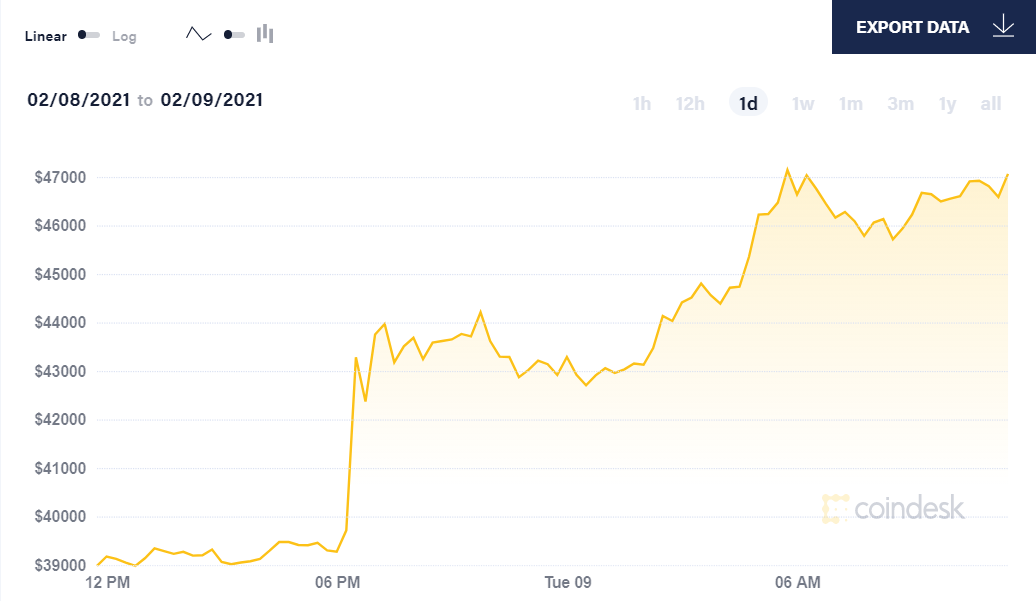 Now reports also suggest that Apple might be the next to buy Bitcoin, and if that happens, others will also join the bandwagon. And as Bitcoin becomes widely accepted for payments, its demand will surely increase and with the limited supply so is its price. It is important to note that all these speculations are made in a long-term scenario. Because in the short term, I am sure that the currency price will fluctuate drastically and scare many investors. Neil Wilson, the chief market analyst at Markets.com, also said that Tesla backing the cryptocurrency could take it across $50,000. And as of now its almost there.

Will Bank join the cryptocurrency bandwagon?

Reports say that 2020 was the year of institutions joining hands and investing heavily in Bitcoin. And now in 2021, it might be the year when banks finally start taking the currency seriously. Yes, there have been debates that the currency is being used a lot for illegitimate purposes, but what isn’t. This doesn’t mean that the government can stop the trading of the currency. And as inflation increases bank might also take in Bitcoin as a means to preserve the value of their money.

Whether or not the gains that Bitcoin has seen in last one day will last is an impossible question to answer. But what can be said is that Bitcoin’s future is still very bullish as more and more companies invest in the same. What do you think about the same? And are you an investor in the cryptocurrency? Let us know in the comments below. Also, if you found our content informative, do like and share it with your friends.