Despite the seemingly endless benefits connected with Bitcoin (BTC). According to some financial experts, Sweden’s Central Bank chief Stefan Ingves compares investing in the famous cryptocurrency to trading stamps.

According to Bloomberg, the Swedish central bank governor indicated today at a banking conference in the country’s capital, Stockholm, that Bitcoin’s value as a trade stamp may eventually collapse if it does not acquire the requisite official backing. 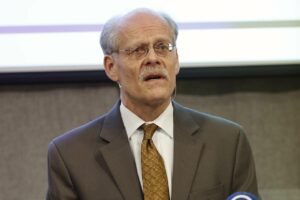 Despite his scathing criticism of the world’s largest cryptocurrency, Ingves admitted that people had made money from Bitcoin.

He still believes, though, that Bitcoin is similar to stamps. And it might if it is not backed by the government.

The Collapse of Stamp Trading

Remember how popular trading stamps were in the 17th century? As part of the concept, shops were compelled to provide customers with printable stamps to increase customer loyalty.

The stamps could be exchanged for money. Also, they were popular in the United States, the United Kingdom, and Japan at the time.

The project, however, failed and was later transformed into loyalty award schemes at the turn of the century.

Bitcoin has seen a huge increase in value since the beginning of the year, spurring widespread adoption by both retail and institutional investors.

Despite the fact that the asset had its greatest drop in May as a result of Elon Musk’s statements and China’s crackdown on cryptocurrencies. It has continued to gain popularity among many.

Bitcoin’s has widespread use in various regions of the world. Because of this, Ingves believes that the cryptocurrency will face more regulation as a result of its widespread use.

“When something becomes large enough, factors such as consumer interests and money laundering enter the picture. So there’s reason to expect [regulation] will occur,” Ingves said in a Bloomberg storey published in June.

Sweden is utilising blockchain technology for its CBDC.

While it is clear that Ingves is not a fan of Bitcoin, the Swedish Central Bank Digital Currency (CBDC) called e-krona has adopted the technology that drives multiple cryptocurrencies.

As previously reported, the country’s financial markets minister stated that the country is considering introducing e-krona as a payment option by November of next year.