Bitcoin miners have started to sell as mining profitability goes down

As energy costs rise and Bitcoin prices slump, the miners are left in a difficult situation. The profitability of the industry has gone down significantly, and it’s more difficult for miners to sustain operations. So, the Bitcoin miners have started to sell their holdings. Earlier, they used to sell 20-30% of what they mined for operational costs, but in May, miners have sold all their holdings, reports arcane research.

Bitcoin miners can no longer hold their coins 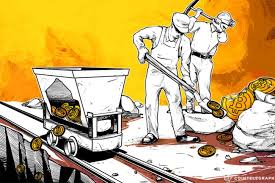 There are many large mining companies that have even gone public in the past 2 years. These companies often don’t book large profits, hodl their coins, and keep stacking. We can understand why they do this from two perspectives. The first is the general idea to hodl BTC for at least 4 years for a massive return. Secondly, since they are public, the companies want to be seen as an indirect investment option for those who were waiting for a spot BTC ETF. Holding large amounts of BTC on their balance sheet means their company’s share price will closely correlate with Bitcoin incentivizing investors to invest in them.

However, the bear markets are the time when these companies are tested, and more often than not, most of them end up selling. For now, the public companies have only ended up selling the 100% output from May. This means the Bitcoins they have stacked earlier are still on their balance sheet. However, if prices slump further, they might need to sell more to meet operational costs.

Bitcoin’s hash rate has reduced a bit recently, and this has resulted in a 2.35% drop in mining difficulty. Earlier, the difficulty was at 30.28 trillion, and it has reduced to 29.50 trillion. During the last difficulty change, it was expected that we will see a reduction, but there was a 1.29% increase. So, it’s good that mining will be a little easier for the next 2 weeks at least.

The impact on Bitcoin’s price

Bitcoin miners are one of the most essential pillars of the coin. They hold a large quantity of the coins, and if they are forced to sell, it would have a significant impact on Bitcoin’s price. Currently, CoinMetrics estimates around 800k Bitcoin are held by miners, and 46k belongs to public mining companies. So, the lower the Bitcoin prices go, the more they sell, and the prices go lower. It’s a vicious cycle.

What are your thoughts as Bitcoin miners have started to sell due to the falling prices of the cryptocurrency? Let us know in the comments below. Also, if you found our content informative, do like and share it with your friends.