Bitcoin Stash of MicroStrategy down by $3.4 Billion

The crypto market slump has surely affected a lot of institutions and investors across the globe. For some institutions, the market crash has also directly affected the prices of the shares in the stock market. The shares of the companies are plummeting and falling and increasing the pressure of the company. This certainly adds to the concept that, cryptocurrency has direct affect with stock.

In one such incidence, the bitcoin crash saw the stocks of MicroStrategy plummet to one of its lowest values. The crypto pile that was accumulated had been reduced by $3.4 Billion at the end of second quarter than the previous one. The hit also saw the stock of the company plummet by at least 66% in the quarters, which ironically is more than the decline of the bitcoin’s 59%. 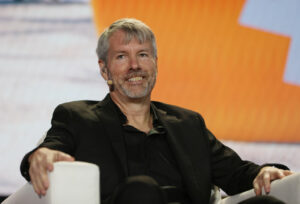 Saylor has played down any worries, continuing to the plan and increasing his stash during the past quarter while Bitcoin witnessed its greatest price decline in more than ten years. Despite the fact that Wall Street authorities normally demand businesses to identify significant losses far sooner, MicroStrategy announced at the end of June that it would disclose results as usual later in the upcoming quarter.

According to the reports, the plummeting of value of bitcoin to $18,900 on June 30 made the MicroStrategy’s Bitcoin stash which was around $5.9 Billion reduce to $2.45 Billion or 58% less in just three months.

However, even when billions of dollars of company were lost and the stock are plummeting steeply, the CFO of the company went on to claim that, the company seeks to acquire and hold bitcoin for a long time. He quoted, “We see our Bitcoin investments as long-term ones, and we have no immediate plans to sell any of our assets.”

CEO of MicroStrategy visions Bitcoin as the future.

According to the reports, the Tysons Corner, Virginia-based company currently owns roughly 129,699 Bitcoin, with an average purchase price of nearly $30,665 per coin. This makes the total cost of the transaction about $3.98 billion.