Boston Dynamics will always be well regarded for their cutting edge high tech robots. Their fascinating robot videos are sometimes uploaded on their YouTube channel. This has been met with both curiosity and fear. A spectacular quadruped robot called Spot has now caught everyone’s eyes.

Speaking about this marvelous robot, Robert Playter the CEO of Boston Dynamics said to CBS News, “Spot is really smart about its own locomotion. It deals with all the details about how to place my feet, what gait to use, how to manage my body so that all you have to tell it is the direction they go to.”

This amazing robot is equipped with 3D cameras fit into it. These cameras help it to map its surroundings and avoid any obstacles. Spot is a very smart robot, upon signaling it can take itself off of its charging station. As long as the route is pre programmed in its system, it is capable of going for a walk by itself.

This interesting robot has caught the eye of the French Army. This robot has appeared alongside soldiers, carrying out military exercises along with them. The French army claims that the robot was being used for reconnaissance during these two days of military exercise. 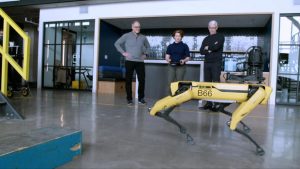 While speaking to The Verge, Boston Dynamics Perry said, “We think that the military, to the extent that they do use robotics to take people out of harm’s way, we think that’s a perfectly valid use of the technology.” He further adds, “With this forward-deployment model that you’re discussing, it’s something we need to better understand to determine whether or not it’s actively being used to harm people.”

Similar to France a lot of military belonging to different countries are now getting robots more and more involved in the military operations. Along with remote controlled drones which are used majority of the time, robots are also used for scouting, surveying and patrolling. This does concern a lot of researchers.

According to a report published by French newspaper Ouest France, Spot was one of the many robots which were tested by the students belonging to France’s École Militaire Interarmes (Combined Arms School). Their purpose behind this was to assess the usefulness of robots when it comes to future battlefields.

The soldiers executed the military exercise containing a number of scenarios. These included an offensive action, a defensive actions and an urban combat test. All these scenarios were first carried using just the human participants and then the same was reenacted using the robots. This was done in order to understand the difference a robot made in the military.

Spot is considered to a very compatible robot when it comes to navigating un even terrains. The robot weighs around 31 kgs and is equipped with cameras. This robot can be controlled with the help of a remote. Since this robot has four legs it makes it easier for this robot to move around in a much better way compared to a wheeled or a treaded robot.

Once the military exercises were over, it was found out that the robot slowed down the operating speed but helped save the lives of troops around it.