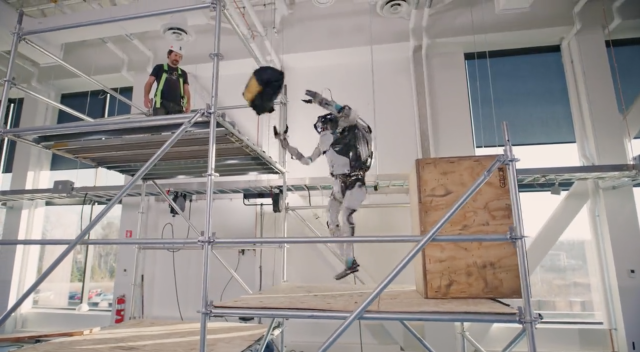 Boston Dynamics showcases a video where we can see Atlas robot could grab and throw objects. Earlier the robot was seen running and jumping. The new skill sets include using hands that have rudimentary grippers that gave the robot a new life.

Now, instead of being an agile pack mule, the Atlas becomes something closer to a human, with the ability to pick up and drop off anything it can grab independently. The claw-like gripper consists of one fixed finger and one moving finger. Boston Dynamics says the grippers were designed for heavy lifting tasks and were first demonstrated in a Super Bowl commercial where Atlas held a keg over its head.

It’s time for Atlas to pick up a new set of skills and get hands on. pic.twitter.com/osOWiiBlSh

The video shows the grippers picking up construction lumber and a nylon tool bag. Next, the Atlas picks up a 2×8 and places it between two boxes to form a bridge. The Atlas then picks up a bag of tools and dashes over the bridge and through construction scaffolding. But the tool bag needs to go to the second level of the structure, something Atlas apparently realized, and quickly throws the bag a considerable distance. Boston Dynamics describes this final maneuver: “Atlas’ concluding move, an inverted 540-degree, multi-axis flip, adds asymmetry to the robot’s movement, making it a much more difficult skill than previously performed parkour.”

Boston Dynamic’s Atlas is a research platform and is not available for purchase. It’s long been the star of many viral videos and has effectively demonstrated Boston Dynamic’s robotic capabilities. In the small world of humanoid robotics, few competitors have shown similar capabilities to the Atlas. Only NASA’s Robonaut offers similar hand-like grippers.

It’s a notable change in messaging from the Hyundai-owned company, which has never previously emphasized how its bipedal machines could be used in the workplace. Boston Dynamics only has two robots that it actually sells: Stretch and Spot. Stretch is a wheeled machine with a huge arm designed to move boxes in warehouses, while Spot is a four-legged robot mainly used to carry out surveillance and inspection tasks, acting as a remote CCTV camera or mapping construction sites and factories using 3D scanners.

“The dream of humanoids is that they should be able to do all the things that we do, right?” says Scott Kuindersma, Boston Dynamics team lead. “A humanoid robot will be well suited for applications like manufacturing, factory work, constructions, [places] where a humanoid form factor actually fits very well, with its bi-manual nature, its ability to stand upright, move heavy things around, and work in spaces that were traditionally designed for humans to do work in.”