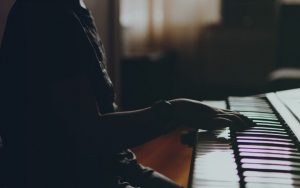 Ever since artificial intelligence created a space for itself, and leaving an impact on every field it touched, researchers and developers never stopped improving the technology so that it would be well suited and prepared to accomplish more groundbreaking things.

And one major quest has been to attire artificial intelligence with human characteristics and features so that it will be self-sufficient and all the more intelligent. Natural Language Processing and Artificial General Intelligence have been of substantial help towards achieving this end and we have some awe-inducing results that sprang out of these attempts to make AI more human.

Many attempts have resulted in a muddled-up AI system producing quite awkward and borderline funny output. One example of this music. Transforming individual notes into a fully expressive performance isn’t exactly a piece of cake and is even harder to automate. Apparently, the ‘art’ in artificial intelligence is not enough for the machine to wear Mozart’s cloak of brilliance. However, innovations always hold the potential to break the rigid structure of impossibility and AI might have accomplished just that.

AI that can play the piano

A research team at the University of Washington is ready to touch the line of success with their AI tool which is capable of achieving the Herculean task. The tool is named “Audeo,” which is a blend of the words audio and video.  Audeo closely observes a silent video of piano performance. And with the help of the visual information, it produces the music which is complete with the characteristic expressiveness as well as the interpretative idiosyncracies of the musician whose composition is observed.

The results depend on the synthesizer software used by the researchers, and it proved to be a bit noisy though very expressive.

Audeo uses as an input visual cues from the videos it observes of musicians playing their piece. And the generation of music can be quite a challenge due to the inherent limitations of the input.

Audeo basically contains three components. The video frames of the keyboard and hand movements of the musician are translated into Piano Roll which is a raw musical symbolic representation. Then by adding temporal correlations, the Roll is made suitable for audio synthesis. This a crucial step that affects the success of audio generation to a great extend. And finally, Midi synthesizers are added to create music that is realistic.

Audio is a good example of how AI algorithms can be trained to create art. These tools could be of substantial help in creating music that is accessible and convenient to engage with.