Canoo Inc., an electric vehicle (“EV”) with a proprietary and highly versatile EV platform for personal and business use, has announced its financial results for the third quarter of 2021.

The company also announced about their expansion plans and about its battery supplier Panasonic. They also announced the establishment of technology hubs in Tulsa, Oklahoma, and Fayetteville, Arkansas to support R&D in electronics, power trains, battery, vehicle engineering, and testing, as well as expanded operations at its first U.S. factory in Oklahoma, which is currently under construction.

“Our discipline continues to be Big News or No News. Therefore, we will accelerate our advanced manufacturing production in the U.S. to begin before Q4 2022,” stated Tony Aquila, Investor, Chairman & CEO at Canoo Inc. “In June we announced Pryor, Oklahoma as the location for our owned manufacturing facility. We have expanded this partnership to include Arkansas and additional locations in Oklahoma. 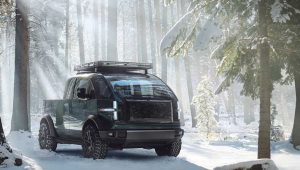 Canoo, the electric automaker that became a publicly-traded company last year, is expanding its U.S. footprint with plans to establish its headquarters and an advanced manufacturing industrialized facility in Bentonville, Arkansas.

“This is an advanced manufacturing facility that will allow us to produce vehicles for unique use cases as well as accelerate our testing into gamma,” said Canoo CEO and Chai Tony Aquila on Monday. “We’re looking for ways to take down the traditional go-to-market way and this will produce vehicles that we will sell, as well.”

The GAAP net loss and comprehensive loss for the three and nine months ended September 30, 2021, included a gain of $25.8 million and $101.2 million on the fair value change of the contingent earnout shares liability, respectively.

The company reported a net loss of $80.9 million in the third quarter, about a fourfold increase from the $23.4 million in losses it reported in the same period last year.

Canoo Inc. is surged over 20 percent by the time of writing this post.