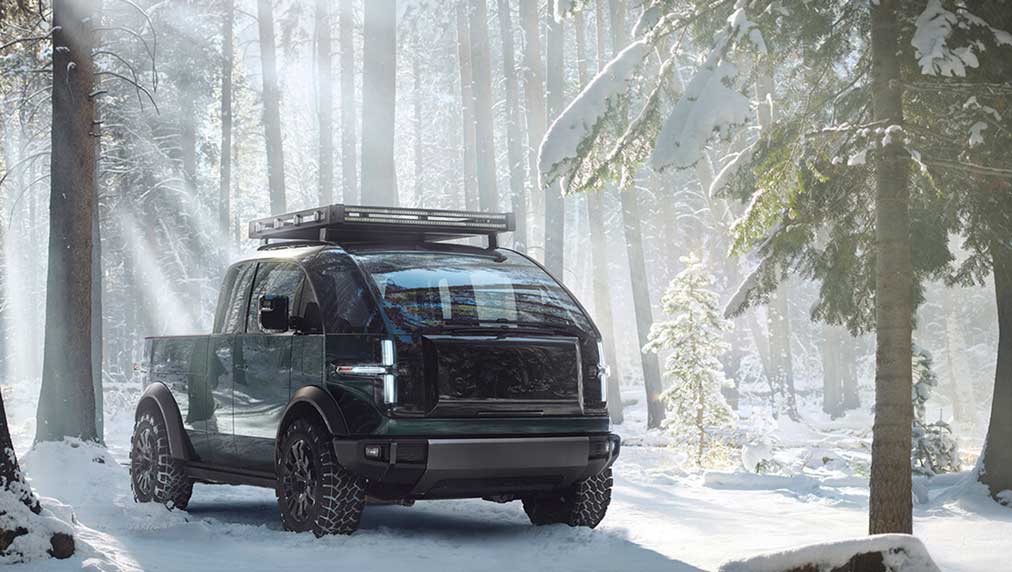 Canoo is a United States-based modular electric automotive platform that aims to build and deliver vehicles with maximum interior spacing which is adaptable to support. The company serves in consumer electronic, automotive, Electric Vehicles and Electronic Design Automation segments of the industry.

Recently, Canoo has shared a sneak peek of its upcoming electric truck which will be the company’s first electric pick-up truck which is built on a similar electric platform as it’s other launch products- the delivery vehicle and the van.

According to a report by Engadget, the company has announced in a statement that it will start the pre-orders of its upcoming electric pick-up truck at the beginning of Quarter 2 of 2021 and the truck will officially be launched in 2023.

As the company has already unveiled the first images of its new electric pick-up truck, we can say that people really have mixed feelings about its design. The design of this upcoming truck is futuristic, for sure! But industry enthusiasts are somehow calling it oddly shaped. To all those people, let me remind you of how Tesla’s Cybertruck looks. However, Canoo has taken up a completely different design route with its electric pick-up truck and it certainly stands-out different from the likes of the Tesla Cybertruck or a Ford or even a Rivian.

The electric truck by Canoo is certainly not compromising on power and performance and speculations reveal that the company promises more than 200 miles of range to be covered from a single charge which is actually not bad! The electric truck featured a dual-motor configuration with up to 600 HP and 550 lb-ft of torque capacity, as mentioned in a report by Engadget. Furthermore, the electric truck is speculated to have a payload capacity of over 1,800 pounds and is also said to be an inch taller than the popular Tesla Cybertruck.

Tony Aquila, Executive Chairman, Canoo mentions is a statement that its Electric Pick-up truck is as tough and strong as any of the toughest trucks out there in the market. This pick-up truck designed by Canoo serves to be exponentially more productive as the company also brings in accessories for people who use a truck for job, adventure or weekends.

The design of the Canoo Electric Pick-up truck includes flip-down side tables, side steps, a storage section and also a front compartment. The truck will also reportedly have plugs on all four sides for exportable power in case one is in need of a generator, as mentioned in a report by Engadget.

As far as the price and availability of Canoo’s Electric truck is concerned, there has been no official information shared by the company as of now. All we know is that Canoo will launch these trucks in the year 2023 with pre-orders starting in Quarter 2 of this year.