Cardano to launch an ERC-20 converter for Ethereum tokens

The Cardano blockchain is getting closer to introducing decentralized financial utilities, with the platform’s ERC-20 converter set to go live on the testnet soon. The new tool will be released on the testnet next week, according to IOHK project manager Francisco Landino of the blockchain’s research and development department.

Cardano is set to launch a slew of new features

Landino revealed the ERC-20 converter would be deployed on the testnet the next week during the most recent Cardano 360 event. The new migration tool was first unveiled in May, with the intention of allowing Ethereum-based tokens to be moved to the Cardano network. 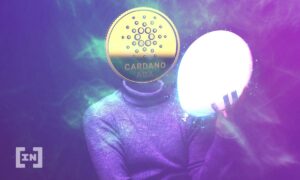 Once the migration tool is implemented, users of Ethereum-based tokens will be able to benefit from Cardano’s transaction capacity and cheaper fees, according to Landino. Consumers would benefit from enhanced security, lower costs, and greater blockchain interoperability thanks to the ERC-20 converter.

SingularityNET, the world’s first decentralized artificial intelligence network, will have its native AGIX token moved to Cardano as the first ERC-20 token. Over 100 companies are switching from Ethereum to Cardano, according to Cardano founder Charles Hoskinson.

Cardano’s price is expected to rise by 35%

Since the bottom on July 20, the Cardano price has been going upwards, establishing greater highs. On the 4-hour chart, an ascending parallel channel pattern has evolved as the third-largest cryptocurrency by market capitalization trades within technical bounds.

Cardano’s price is currently rebounding off the ruling technical pattern’s negative trend line at $2.49 and the 78.6 percent Fibonacci extension level at $2.55. For the bulls to have a bullish outlook, ADA must continue to remain above these support levels. 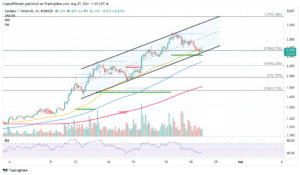 Cardano price could aim for the upper boundary of the parallel channel at $3.46, which coincides with the 127.2 percent Fibonacci extension level if the current chart pattern is strong. The breakout line of the Momentum Reversal Indicator (MRI), which corresponds to the middle limit of the technical pattern, is the next hurdle for ADA at $2.96.

If Cardano fails to hold above the aforementioned lines of defense, more support will be found at the MRI’s $2.41 support line. What do you think regarding this? Do share your thoughts in the comment box down.