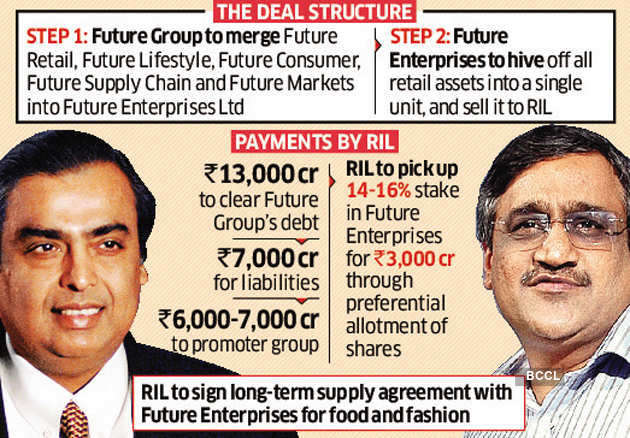 The news definitely must have broken Amazon! The Competition Commission of India has recently on 20th November approved the most looked-forward deal of the year between Kishore Biyani’s Future Group and Mukesh Ambani’s Reliance Retail.

The Competition Commission has certainly granted its approval for Reliance Retail Ventures Limited and Reliance Retail Fashion and Lifestyle Limited to take over Future Group’s retail business, wholesale business along with logistics and warehousing business.

This means that now Reliance Retail will have access to over 1,800 offline stores across Future Group’s variety of businesses including Big Bazaar, Easyday, FBB, Central and Foodhall stores which are spread across 420 cities in the country.

This acquisition is done on the account of future Group merging some of its aforesaid businesses into FEL which stands for Future Enterprises Limited. Thus, the wholesale and retail businesses of Future Group will now be owned and controlled by Reliance retail and Fashion Lifestyle Limited (RRFLL) which is a wholly-owned subsidiary company of Reliance Retail Ventures Limited (RRVL).

Kishore Biyani, Group CEO of Future Group mentioned in a statement that the logistics and warehousing undertakings shall be transferred directly to Reliance Retail Ventures Ltd. This transaction and organisation shall provide Future Group with holistic solutions to deal with the havoc that is COVID-19 and the macro-economic challenges that cannot be ignored.

Furthermore, he added that this transaction of businesses has taken into account keeping the interest of stakeholders, creditors, suppliers, lenders and employees in mind, to give continuity and longevity to all its businesses.

On the other hand, Jeff Bezos’ Amazon got a big blow after the CCI announced its decision as it was certainly against his company’s interests. Earlier, Amazon won an injunction from a Singapore arbitrator to stop the acquisition deal between Future Group and Reliance Retail Ventures Ltd. arguing on the grounds that the Indian retail company breached certain provisions of their contract in a separate deal with the e-commerce giant.

Amazon also reached out to the CCI, SEBI (Securities and Exchange Board of India) and stock exchanges convincing them to consider the injunction from the Singapore arbitrator and not approve the deal at any cost.

However, the court went against Amazon’s wishes and took its decision in favour of the joint deal, also seeking restraint from Amazon to reach out to regulatory bodies against their decision.