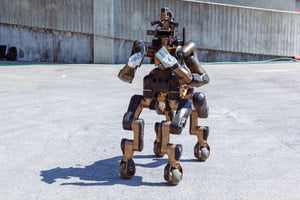 Karate-chopping centaur robot could save your life one day Despite being a research project, Centauro was developed looking closely to applications

In Greek mythology, a centaur is a creature with the upper body of a human, and lower body and legs of a horse. In Italy’s IIT-Istituto Italiano di Tecnologia, Centauro is a 5-foot-tall robot that boasts an anthropomorphic upper body and four-legged base. Capable of operating for 2.5 hours at a clip, the 200-pound robot is designed for maneuvering over rugged terrain and carrying out manipulations requiring high strength. Its goal? To serve as the ultimate disaster response robot.

“Despite being a research project, Centauro was developed looking closely to applications,” Nikos Tsagarakis, one of the researchers who worked on the project, told Digital Trends. “The target application is to use it to assist emergency responders. But the versatility of the robot mobility and manipulation make it suitable for a variety of application domains. [These include] as a co-worker collaborative robot in mixed human-robot industrial production lines, logistics operations, and maintenance of remote or hostile facilities and infrastructures. It can be also exploited by other security forces, such as for inspection tasks or bomb disposal.”

While the mythological form factor might look somewhat fanciful, Tsagarakis noted that the robot was made to do more than simply grab people’s attention. “Centauro was designed with the inspiration and objective to match human strength, power, and physical sturdiness to execute heavy, high-impact physical interactions,” he said. “At the same time, [we wanted] to demonstrate motion agility close to that of human.”

The humanoid-style upper body gives Centauro the ability to carry out human-like dexterity or strength tasks using its manipulation arms. (Including, as seen in the top video, a mean karate chop!) Meanwhile, its four-legged base gives it more stability for locomotion. These legs incorporate six degrees of freedom and allow the robot to rotate and extend its hip, knees, and ankles. At the bottom of each leg is a wheel module, which serves as a rolling “hoof” to keep with the centaur theme.

This isn’t the first innovative robot project Tsagarakis has been involved with. Previously, we wrote about the Walk-Man project, a European Commission-funded humanoid robot that’s designed to serve as a robot emergency responder which could be used to assist firefighters.

“The next generation of the [Centaur] robot will contain holistic upgrades both in the hardware and software of the system,” Tsagarakis said. “Having seen the potential of the robot capabilities and versatility, our effort will be placed on the industrialization of the robot hardware and the further development of our software. This will incorporate effective human-robot interfaces, application specific software tools, and utilities to facilitate the robot control taking into account the end-user perspectives.”