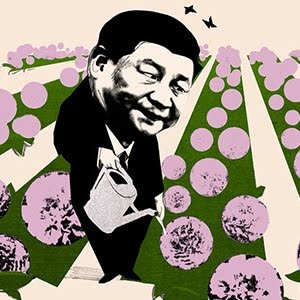 The China Netcasting Services Association has produced a list of 100 themes that local netizens are not permitted to mention in short videos posted online.

The list, formally known as the “Online Short Video Content Review Standard Rules (2021), contains the expected restrictions on insulting China’s leadership and implying that history did not unfold exactly as the Chinese Communist Party’s textbooks depict.

However, the rules include some additional red lines, such as a prohibition on exploiting footage from television shows. Clips from shows that are not allowed to be aired in China are also prohibited.

The representation of unusual weddings is also problematic. Fig leaves, or fig-leaf-sized symbolic clothes that almost conceal body regions likely to be represented during sex, are out.

Anything that questions the theories of Socialism with Chinese characteristics, as well as discussions of strong nationalistic politics or fascism, is prohibited.

Cryptocurrency is also on the list, with videos promoting cryptocurrency mining, trading, or speculating on its value being prohibited.

The representation of the following subjects is also prohibited:

Giving false information regarding charitable gifts has also been added to the bad list. Any conversation comparing religions that could lead to sectarianism is also a red line.

The list’s final item translates to “Other violations of rules, regulations, social public order, and good traditions” – which most likely includes everything mentioned above, as well as much more.

The Register wanted to know how Chinese citizens react to such laws, which severely limit people’s freedom of expression. We realise that they do so stoically – with the occasional outbursts of alpaca puns – since breaking the rules can limit access to jobs, education, and even high-speed internet.

Platforms that host videos that are deemed inappropriate may potentially face sanctions. The Register expects China’s Cyberspace Administration to start criticising, then fining, companies like Tencent, Douyin, and Weibo for videos that don’t follow the new standards soon.