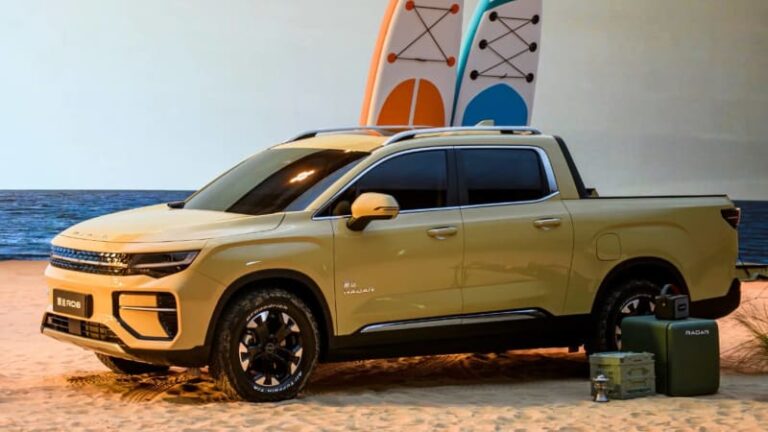 China’s Geely is known for making electric vehicles in China. While the competition in EV sales in China increases the automaker is launching a new electric pickup in the market. It is especially because the growing interest among residents in outdoor activities like camping is increasing. The coronavirus restrictions earlier seem to have had the influence to bring up the interests.

The Volvo owner also launched a new brand, RADAR, at an online event on Tuesday where it showcased its first pickup product, which is called RD6. An earlier statement had referred to the new truck as R6.

It did not disclose the vehicle’s selling price but said it would have a driving range of more than 600 km (370 miles) per charge. Pickups are considered a niche segment in China where they are mostly used by farmers. They are still banned from most urban roads despite trials since 2016 allowing limited entry to several cities and urging Beijing to remove red tape. Pickups contributed around 2% of China’s auto sales last year, with growth outpacing that of other segments including sedans and sports utility vehicles.

Interest in vehicles is growing among the country’s urban residents who are taking up outdoor pursuits as COVID-19 measures discourage gatherings and limit travel. “In an optimistic estimation, the annual sales of pickup trucks can reach 3 million units in China by 2030,” CEO of RADAR Ling Shiquan told Reuters.

“More people are pursuing a healthy lifestyle with more outdoor activities while the governments are also relaxing restrictions for pickups in cities. Those changes are supporting the growth of pickup trucks,” Ling added. Nonetheless, sales of pickups fell 10.3% in the first five months of this year, against a 13% fall in passenger vehicles more broadly, data from the China Passenger Car Association (CPCA) showed, with the industry also hit by COVID-19 restrictions.

Ling said Geely aims to start offering the RD6 to Chinese consumers in the fourth quarter. The company is also studying the Southeast Asian market for potential expansion opportunities.

Geely may also bring the trucks to the United States, the world’s largest pickup market, to compete with existing players such as Ford, Tesla, and Rivian, Ling said.

China’s pickup market is dominated by Hebei-based Great Wall Motor, while foreign players include Ford’s F-150 Raptor and a $9,000 pickup truck launched by General Motors with its local joint venture last year. RADAR will add to the more than 10 passenger vehicle brands Geely owns, which include Zeekr and Polestar. It will produce the pickups at a plant in the eastern province of Shandong, the company said.