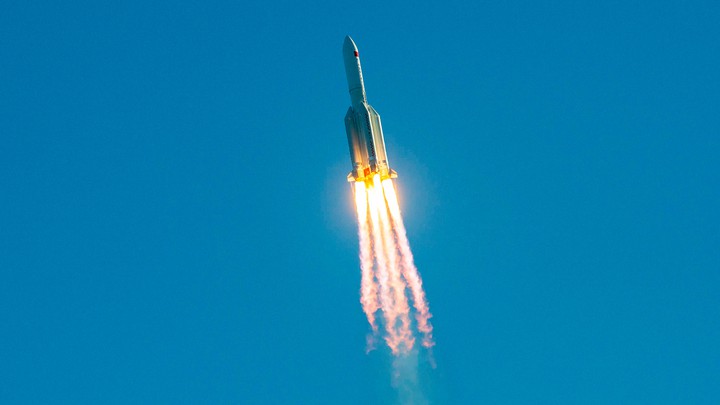 The huge Chinese rocket named “Long March 5B” has recently dropped successfully on Earth ground and disintegrated over the Indian Ocean, according to Sunday reports. After a long haul of speculations over where the huge 23 metric tonne-core of the Chinese rocket will fall, the Indian Ocean is the place where it descended successfully without any speculative harm or accident to anybody.

After continuous analysis by the China Manned Space Engineering Office, the last location where the Long March 5B wreckage would fall was monitored to re-enter the Earth’s atmosphere with a landing area at 2.65° north latitude and 72.47° east longitude, according to a report by CCTV. These were the coordinates for an area in the Indian Ocean where the rocket would finally fall.

As mentioned in a report by Space.com, the unmanned rocket was supposed to fall in an uninhabited area and it was successful in doing that over pure ocean water without any reported casualties. It was speculated in one way as over 70% of the Earth’s surface is covered by Ocean. However, to be on the safer side, national and private entities from all around the world were tracking the fall, just in case, to be on the safer side.

As of Saturday i.e., yesterday, the Chinese rocket was speculated to fall somewhere over the north Atlantic Ocean at around 11:30 pm, according to a Twitter update by the Aerospace Corp. that was continuously tracking the falling object.

Although, people were very keen to know the whereabouts of the uncontrollably falling Chinese rocket and several sources were showing live streams with constant updates on the rocket that was being monitored and tracked by the authorities.

Aerospace Communications is one entity that supports national security space programs and it was continuously posting updates on their Twitter feed about the current location of the object. The United States Space Command was regularly updating their website- space-track.org with the latest information on where the rocket is estimated to fall, based on several parameters including Earth’s atmosphere and how it could impact the falling Chinese rocket, as mentioned in a report by Space.com.

For amateur skywatchers, Virtual Reality Telescope- Gianluca Masi was also broadcasting live footages of the Long March 5B rocket from Rome and people could watch the whereabouts of the fall, live on YouTube as well.

CCTV mentioned in their reporting that after analysis and monitoring, the last stage wreckage of the Chinese rocket was estimated to fall at 10:24 (0024 GMT) on the Indian Ocean with the above-mentioned location points.