Humans have always been a curious species. If not for our curiosity, we would still be stuck in stone-age caves, hunting animals and gathering eatables. Curiosity has taken man to the corners of the earth, the highest mountains, and even the deepest oceans.

However, documenting ocean life has been challenging due to the hypersensitivity of various special of fish to the movement of humans underwater. 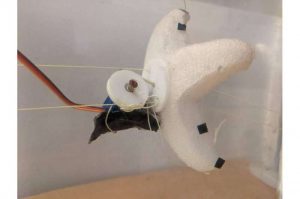 Computer scientists have been working on a special marine robot to tackle this particular problem. These robots are equipped with the ability to move in stealth mode alongside their carbon-based counterparts. The soft robotic fish fabricated by the Computer science and Artificial Intelligence Lab of MIT is one good example of this.

However, the scientists did face a string of challenges while developing the robotic fish, one being the complex movement of water which threatened to ruin electronic systems. The robotic fish developed by MIT had to go through months of manual tweaking so that it could adapt itself to work effectively in sync with the changing movements underwater.

Another group of MIT professors led by Wojciech Matusik and Daniela Rus felt there was more room for development and therefore created a new tool that enabled the simulation and fabrication of a functional soft robot in a matter of few hours.

The team created a soft robotic starfish from silicon foam which is equipped with the ability to move with a single low-powered actuator. Tendons connected to a servo motor are what the fish uses for movement, which also enables it to flex and relax the legs.

“The passive interactions between an underwater robot and the fluid forces around it—whether it’s a calm current or an undulating wave—are much more complicated than when a robot is walking on stable terrain, which makes creating its control systems quite difficult. But using this simulator, a process that might normally take days or weeks can happen in just a few hours.”

The starfish design was chosen primarily because of its simplicity and elegant movements, clubbed with its ability to squeeze and release its legs which induce forward movement. The team has also discovered that the simulator works quite effectively for other designs as well and therefore in the future, they will take to exploring newer designs with more complex structures.

The tool used by the group includes a machine learning model that does an initial simulation and design of the robot’s control mechanisms. These are then fabricated instantly. More data is acquired through real-world experiments which will help in the improvement and optimization of the design. The silicon foam was chosen for the body owing to its elastic properties and natural buoyancy. It is also easier to fabricate quickly. The experiments also showed that the starfish was capable of moving four times faster in comparison to a hand-crafted controller. The robot starfish also threw light on certain high-frequency movements that were so subtle that it missed the notice of human experts.

The paper was co-authored by Josephine Hughes, Tao Du, Wojciech Matusik, and Daniela Rus, and was published in the Journal of Robotics and Automation Letters.