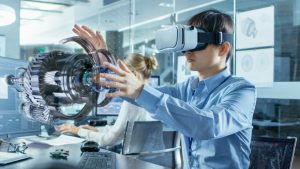 It is rightly said that adversity is the mother of all inventions. The pandemic has unleashed a wave of change, which almost pushed us to think out of the box to adapt to a life that demanded a price on a lot of things that we earlier took for granted. Schools and offices were reduced to a screen, meetings no longer needed conference rooms or chairs. In short, technology ensured a smooth transition to this new normal, blended with a few streaks of novel measures all colored with technological backing. Zoom calls, google meets, Microsoft teams have all become a  part of our routine.

However, for those in the industrial field, being limited to a computer screen proved to be a challenge, despite the support of virtual meetings. Because a zoom call cannot add up to the on-field work experience that is required to endow them with a collaborative and connected future. This is where extended reality steps in, with the potential to kick start a revolution.

An employee at Ciena, a telecoms network provider explains the possibilities offered by extended reality and how it catered to the various professional requirements of the employees. They have even adopted their own extended reality solution.

A technology that started from a mere haze of curiosity has now progressed to the level of solving high end business problems. Being not able to physically see or touch, especially while working on highly technical systems will no longer be a problem, thanks to extended reality. However, there are certain gaps to be filled before effectively adopting this experimental technology. Slower networks with high latency can prove to be a major roadblock for a critical business application. This underscores the necessity for a robust network with increased speed and low levels of latency. Also, the multitude of connected devices can pose a challenge to deployment of the technology, which implies the crucial role which 5G and optical networking will play in backing their adoption. Monitoring and quality management must be given additional focus to assure that a jittery network does not lead to losses or other serious consequences.

Though extended reality has a lot of ground to cover in terms of efficiency and clarity, it cannot be denied that they hold a lot of potential that can prove to be of monumental benefit to the users.