How Animators Are Using Artificial Intelligence For ‘The Simpsons’

Harry Potter had a magic wand that helped him perform magic. And technology might be on the race to replace the wand in the non-fictional human world. And recent advancements attest that it is maintaining its lead. Recently, South Korean music technology startups made headlines by using artificial intelligence to ‘ressurect’ the voices of dead artists. Once again artificial intelligence is showcasing its skills that induce wonder and awe. This time, it makes news with the much loved show The Simpsons. Ever since it graced the television in 1989, Homer Simpson and family has captured the audience’s heart with the on point wit and humor.

Amit Katwala, senior editor at Wired UK, recently explained how animators are using technology to give voice to characters of long running shows like The Simpsons. 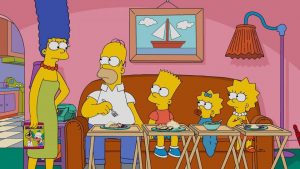 For twenty five seasons of the show, Bart’s teacher, Edna Krabappel was voiced by Marcia Wallace. Although the Simpsons are immune to time, the humans who voice them are not. After Ms.Wallace’s death a few years ago, the audience heard the voice again recently. However it came with a twist. In order to bring her back, they spliced together recordings from the previous episodes. This raised a rather interesting question in the mind of Amit Katwala, who weighed the possibilities of using artificial intelligence to perform the same task. What if one day, Dan Castellaneta, who plays Homer decides to leave the show? Would they be able to use AI trained on his recordings to carry on the role?

The speculations struck solid ground with Speaking of AI, a YouTube channel run by Tim McSmythurs, a British guy based in Canada. He has built a generic model trained on approximately hundreds of hours of data. And he has been successful in tuning the model to mimic the voice of any person. Katwala lists the interesting and quite fun experiments McSmythurs has done with the model.

These manufactured voices go by the name ‘deepfakes,’ a term that might be heard in connection to disinformation used to deceive people by using manipulated images. This technology can now help animators to voice certain characters. However, it comes with a catch, since it is entangled in a bunch of legal issues in addition to certain other limitations. A limitation which can be highly beneficial for the actors, which gives them a leverage against AI putting them out of trade. This is due to the fact that the voices generated by deepfakes are often bland and devoid of emotion, since they do not have the treasure of years of experience that humans have. An AI model of Homer, for instance, would not know how to stress a point with a particular emotion, since it’s been fed on only a very small subset of things catering to Homer Simpson.

The more viable and economical option would be to hire an actor who could perform the same without spending an eternity on training to adapt a particular emotion while voicing a character.