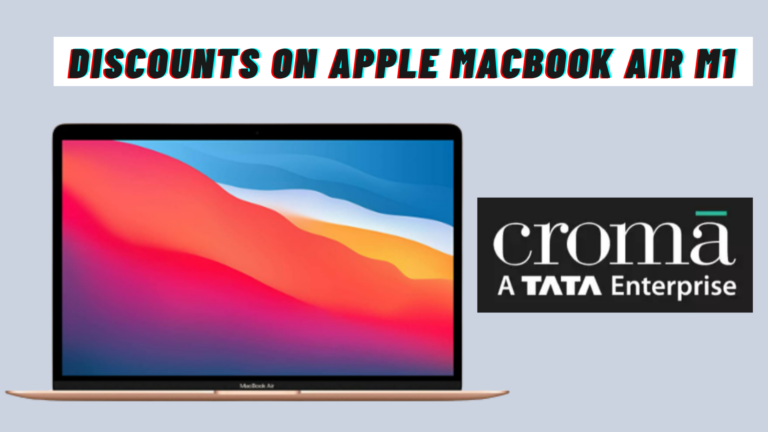 Are you considering purchasing a new Apple MacBook? Then now could be a good moment to take advantage of this deal. For this holiday season, we have the one-generation older Apple MacBook Air M1 on sale. According to reports, the laptop is discounted by Rs. 20,000 on Croma this season. Everything we know so far is as follows:

Meanwhile, Apple has already released a new replacement MacBook. However, given the price provided by Croma, we believe that this one-year older M1 model is a wonderful option for you to consider.

This laptop was first launched for a premium price tag of Rs. 99,999 back in 2020 and now the laptop has received a massive discount where Croma has already listed the pricing of this laptop to Rs. 89,990 and now they are providing an additional discount by Rs. 10,000 which is only applicable to the users who are using the HDFC Bank Credit Cards.

As an indication of wonderful news! If you do not have enough money for transactions to purchase the laptop. You may also get an EMI with the Qik EMI card. You will also be able to make no-cost EMI payments if you use this HDFC credit card. This No Cost EMI, however, is only available for the 6, 9, and 12-month options.

If you have finally planned about buying this laptop, then checkout the specification side of this laptop down below:

What does this Apple MacBook Air M1 feature?

This M1 chipset features a new 8-core CPU, as well as a 16-core neural engine and a 7-core GPU. This laptop’s screen has been stretched across a 13.3-inch display panel that is an LED-backlit IPS panel and supports a maximum resolution of 1560×1600 pixels.

One of the primary reasons you should consider purchasing this MacBook Air M1 laptop is the fantastic battery life it provides! This laptop will be able to deliver an overall battery backup of 15 hours, which can be extended to up to 18 hours, thanks to the greatest performance-centric and battery-efficient processor. This laptop also includes a considerably faster 30W wired charger.