The cybersecurity firm released its earnings report after the market closed on Wednesday.

“CrowdStrike delivered a robust third quarter with broad-based strength across multiple areas of the business leading to net new ARR growth accelerating and ending ARR growing 67% year-over-year to surpass the $1.5 billion milestone. Our outstanding results this quarter demonstrate the flywheel effect of our platform and reflect continued strong customer adoption for our core products in addition to the growing success of our newer product initiatives including identity protection, log management and cloud. With our leading technology, unmatched platform and approach to stopping breaches, we continue to eclipse our competitors and extend our leadership position,” said George Kurtz, CrowdStrike’s co-founder and chief executive officer. 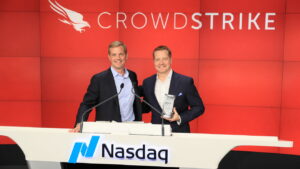 Annual Recurring Revenue (ARR) increased 67% year-over-year and grew to $1.51 billion as of October 31, 2021, of which $170.0 million was net new ARR added in the quarter. Net new ARR year-over-year growth accelerated to 46% on an as-reported basis and 55% on an organic basis.

CrowdStrike stock rose 1.7% to near 205 before the market open on stock market today. Shares fell 7% in Wednesday’s regular session. CRWD stock had lost nearly 5% in 2021, heading into the earnings report.

For the current quarter ending in January, CrowdStrike forecast revenue of $409 million at the midpoint of its outlook. Analysts had projected $400 million.