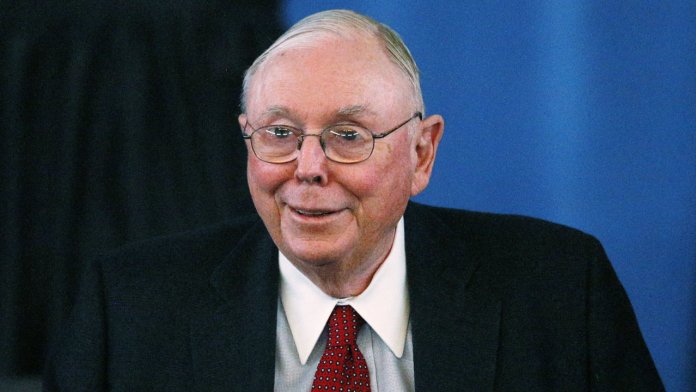 Munger, 98, has long been an outspoken critic of cryptocurrency trading, claiming that the industry is dominated by “those who want to get rich soon for doing very little for civilization.”

He continues, “I don’t think it’s good that our country is going insane about bitcoin and its ilk.” “I despise it.”

Munger made the comments in an exclusive interview with Yahoo Finance’s Andy Serwer ahead of the Daily Journal’s annual shareholders meeting, where he serves as chairman.

Munger’s scathing remarks about cryptocurrency are the latest in a string of similar remarks. He’s called bitcoin “rat poison” and “noxious poison” in recent years. Warren Buffett, the CEO of Berkshire Hathaway and a longtime friend and colleague of Munger, has similarly referred to bitcoin as “rat poison.”

According to a JPMorgan Chase (JPM) poll done in June, one-third of mainstream investing firms concur with Buffett’s assessment. Munger expressed his displeasure with the US government’s reluctance to outlaw cryptocurrency in an interview with Yahoo Finance on Wednesday.

“To accept it at all was a major mistake,” Munger argues. “You let a nasty genie out of the bottle,” says the narrator.

Munger, on the other hand, applauded China for enacting a cryptocurrency prohibition in September.

He stated, “I believe the communist Chinese were wiser than we were.” “It was simply outlawed.” Though top federal authorities have expressed a desire to increase monitoring, the future of cryptocurrency regulation in the United States remains uncertain. Last July, Treasury Secretary Janet Yellen advocated the swift adoption of laws for stablecoins, a type of cryptocurrency whose value is tied to a commodity or currency, such as the US dollar.

“The truth is, when our regulatory institution leaves government, they go into this heavy promotional capitalism,” he claims. “As a result, getting the government to make smart, wise decisions on something like bitcoin is quite difficult.”

Also read: Nayib Bukele warns ‘boomer’ US senators who are tired of Bitcoin to stay out of it