With the purchase of an $83 million mansion equipped with two panic rooms, a “cryptocurrency billionaire” has assured they would be secure at home. According to the real estate website Dirt, the Pacific Palisades property is the second-most expensive residential sale in California this year, with 20,000 square feet of space, six bedrooms, and 18 bathrooms, as well as a retractable roof. 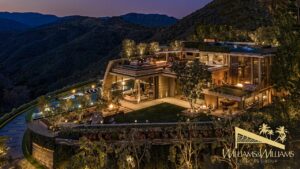 The owner of the home in Los Angeles made their fortune from “cryptocurrency holdings” and purchased it in an off-market deal. The home boasts a chef’s kitchen designed by Nobu, a theatre, an infinity pool, and a spa.

If the two panic rooms weren’t enough, the mansion, which was built by developer Ardie Tavangarian and is listed by Branden and Rayni Williams of Beverly Hills Estates and Judy Feder of Hilton & Hyland, also has a master bedroom that can be accessed by a retinal scanner.

The Pacific Palisades mansion is the second-most expensive residential sale in California this year. The new owner made their fortune from “cryptocurrency holdings” and purchased the home in an off-market deal, according to real estate sources. It boasts 20,000 sq ft of space, six bedrooms, 18 bathrooms, and a retractable roof.

While the home’s high price is not unusual in California, it is unusual for the Westside of Los Angeles, where the purchase has established a new record.

According to Dirt, the high-tech home was offered for rent for $350,000 a month prior to the purchase. Despite the fact that the new owner’s identity has not been revealed, Forbes estimates that there are now 12 cryptocurrency billionaires in the world, up from four in 2020.

If you find this informative then do share this with your friends and leave your comments below.