Cryptocurrency prices today : Bitcoin, Dogecoin, and XRP have all dropped by 6%

The Major cryptocurrency saw profit booking on Monday morning after a sustained run-up. With the exception of US dollar-denominated tokens, all of the top ten cryptocurrencies were trading in the red at 9.30 IST on Monday. Crypto tokens have dropped as much as 6%, led by Bitcoin. 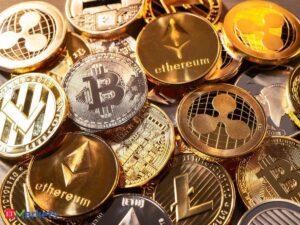 The largest cryptocurrency rose for the 11th day in a row on Sunday, reaching $42,606, its highest level since May 18. However, profit-taking across the board shook the crypto market’s confidence.

Profit booking has been seen throughout the cryptocurrency spectrum in the last 24 hours. This profit booking was predicted after Bitcoin’s incredible run beyond $42,500, according to Edul Patel, CEO, and co-founder of Murex.

“As BTC plummeted, so did the rest of the market. Bulls, on the other hand, stayed active on ETH. With the hype increasing, ETH would be the coin to keep an eye on. For the next 24 hours, profit booking is anticipated to continue “Added he.

After stepping up its crackdown on cryptocurrency trading earlier this year, China’s central bank has promised to keep up the pressure. Binance Holdings is being investigated by India’s anti-money laundering agency to see if it has a part in an ongoing inquiry into betting apps.

Binance executives have been called for questioning by the Enforcement Directorate, which is awaiting a response.

Ethereum, the second-largest blockchain network, is poised to go through a technological change that will drastically alter the way transactions are handled, as well as lower the supply of the ether token and considerably increase its price.

Bitcoin has been in a downturn for the last three months, according to DOW theory. The lower high has been broken on the chart, indicating a possible trend reversal from here. On a daily period, the Relative Strength Index (RSI) is trading above 60, indicating that purchasing momentum is strong.

If the RSI stays above 60, the rally might last a few weeks, but if it doesn’t, Bitcoin could stabilize for a little longer before making its next move.

Ethereum continues to outperform Bitcoin, which is good news for altcoins. DEFI, NFT, and GAMEFI tokens may do very well in the coming weeks, as there has been a lot of growth in this field when the markets have corrected.

The quantity of ETH on exchanges has been depleted, according to on-chain data. The supply of ETH 2.0 validators is growing, which could lead to a supply shortage. Within a week, the market mood appears to have shifted from fear to neutral.

Also read: In Nigeria, cryptocurrency adoption is at an all-time high.