Cryptocurrency’s revolution from the mayor of Miami, Francis Suarez – Miamicoins! 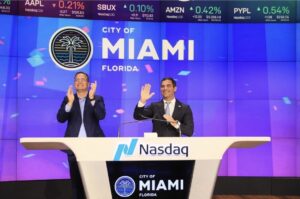 In August, Miami marked an important day for the citizens of the city Miami and the crypto market, as the city mayor Francis Suarez rolled out a new cryptocurrency called “MiamiCoin.” Miamicoin was created by an organization called city coins. The step has come with the intension to portray cryptocurrencies as a community driven revenue stream. Not only Miami, multiple cities have come up with their cryptocurrency to empower the crypto market. Introduction of new cryptocurrencies in the market, will surely work as a fuel to run the market and take the market in the necessary direction.

I’m so excited to announce that the @CityofMiami has received its first-ever disbursement from @mineCityCoins totaling $5.25M.

This is a historic moment for our city to collaborate with an innovative project that creates resources for our city through innovation not taxation.

From the tweet it is understood that Miamicoins worth $5.25 million was disbursed into the city funds. The mayor of Miami called it as a historic day. He also mentioned that, he’s thrilled to know that, the city is marching towards development but by innovation and not by taxation.

Crypto crash and its effect on Miami Coin

Last week, on Thursday, the crypto market imploded in the most unexpected circumstances. After the crash all the cryptocurrencies from Bitcoins to Ethereum lost its value by at least 50%. Miamicoins was no different. Miamicoin lost almost 95% of its value from its September peak. The value of Miamicoins was around $0.0032 as of May 13. Miamicoins loss in value is surely turned out to be the worst news for the investors and has caused a lot of panic among the citizens of Miami.

Miamicoins are now a speculative asset. The city and individual retailers do not appear to accept cryptocurrencies as payment for goods or services. However, Miamicoin has operated as a volatile asset that generates revenue for the government based on its valuation among cryptocurrency dealers.

Cryptocurrencies like Miamicoins require a lot of publicity and awareness creation. To aid this part, city mayor had taken a lot of steps to endorse Miamicoins in the right direction. There were a lot investors also interested in going with Miamicoins. But, the market crash has certainly brought in a lot of doubts in the minds of the investors. Moving forward, if Miamicoins had to stand a chance, endorsement, more and more awareness, stability in terms of usability and all other factors would play a quintessential role in bringing back Miamicoin to its peak and maybe achieve even greater heights.