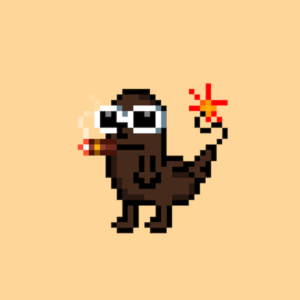 CryptoDickButts, essentially represents the devolution in the next state of art as NFTs. The series 3 features 5200 randomly generated CryptoDickButts priced at 0.052. The DickButt actually came into existence as the comic book artist K.C Green made a popular meme out of it. Essentially what started as a joke and a meme among the early Crypto Punk Holders, became an NFT series on the Ethereum Blockchain. Despite the silly and absurd visuals, the NFTs are persistent in its continued success embodying the core tenets of decentralization.

CryptoDickButt’s series 3 NFT trading at a surge of 690%

At around 290 ETH, or $495,000, in daily trading volume for the Ethereum-based NFTs on OpenSea at the time of writing, has propelled Dickbutts to No. 6 for the day, surpassing more seasoned projects like Goblintown, Cool Cats, and Art Blocks. The volume has increased by 135% over the last week. The overall surge that the series witnessed was at around 690%

The reason behind the pumping price of the NFT.

If we critically analyze the track that the NFT are in, it would be difficult to pen down the reasons for the pumping price of the NFT. Some cryptocurrency experts believe that, Meltem Demoirs tweet in regards to the NFT might have been one of the major reasons for the surge.

Let’s look at the tweet made by Meltem Demoirs.

fratres mei, let us gather in the name of art, culture, and math https://t.co/cZil9g8YjQ pic.twitter.com/Wyl7JfPQqa

In the twitter spaces, Demoirs went on to say that, “The Dickhead community is ever growing and the community has essentially been only about one thing and that is the universal truth.”

From the above instance, it would be fair to make the observation that, in digital market space, especially NFT, there are particularly no set of rules to carve out an NFT. For example, which started as a joke or a meme in 2006, now is an NFT that is witnessing a growth like no other. So, we can say that there is no conventional method to be followed to be successful in NFT industry.

In this instance, backed by the tweet of Demoir, the ever-increasing culture of the meme and the Dickhead Community itself, has sparked the shoot up in the prices of the NFT series. In contrast to the general NFT projects, CryptoDickButt has rather had a persistent show in the market and has prevailed exceedingly well in tough market situations.

CryptoDickButts community is increasing and how. The pleasing aspect of the evolution of the community is that the increase is happening at a satisfying pace and also making big contributions in the NFT sector. The boom of CryptoDickButts also gives the creators of NFT an opportunity to think unconventionally and have a chance to dominate the market.

What are your thoughts about the surge in the NFT prices? Share them in the comments below. Also forward this article with your fellow NFT lovers and share their views as well.