Panic, paranoia, fear. Put them together in a blender with a pinch of confusion devoid of logic. And we have a brilliant recipe for chaos. The very same recipe is brewed in different flavors in the US following the cyberattack on Colonial Pipelines. Darkside has forced the company to go to a complete halt. (It’s not surprising that Darkside strangely reminds one of Darkseid. After all, both entailed panic and chaos.) 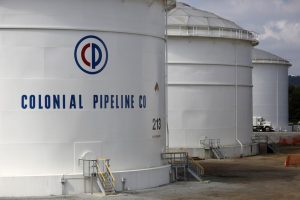 People have gone into a frenzy, and fears of a probable gas shortage and complete refusal to take the eco-friendly lane (waking up in the morning and cycling to work in a suit is pretty funny when Mr.Bean does that, not in real life though) has kickstarted a chain of panic buying. And this recklessness can actually add fuel to the fire, which is a fitting analogy in this particualr context. Fear of gas shortage can actually create a gas shortage here. Nietzsche and Schopenhauer and all those philosophers who insisted on the pointlessness of life might actually find a valid point here!

And as usual, Twitter has taken up the drill, and memes are on their way. There might be a shortage of gas, but not of memes.

If you haven’t seen those last three brain cells in action, now you have a chance. There is a level of brilliance about how people switch off their brains with the ease and grace of Damon Salvatore switching off his humanity.

I don't know who needs to hear this, but the only #GasShortage2021 will be caused by morons like these panic hoarding gas. STOP IT. pic.twitter.com/P3MyRxBC9x

Apparently, Homo Sapiens managed to survive because they had cognitive functions and comprehension skills that outweighed that of neanderthals. And scenes like this makes one question the validity of that point.

When I say I can’t stand people….I mean it! 😩😩😩😒#GasShortage2021 pic.twitter.com/q6zWjXxOGg

Whoever thought plastic bags could be put to such use! Cannot deny that adversity fuels innovation, literally! And perhaps, when in situations of this sort, we are invincible to the point that hoarding a trunk full of fuel is just a piece of cake.

Nobody knew that gas shortage is directly proportional to common sense shortage. Moments like these are the best times to attempt a ‘compare and contrast’ between education and literacy.

Talk about parallels and echoes of the past. The situation cannot get more poetic than this!

We still haven't learned, have we? 🤦‍♂️🙄#GasShortage2021
Last year This year pic.twitter.com/FI7Pvv8pzy

The only people whose dictionary screams safety at this point.

It’s the perfect time to catch up on all that missed workout.