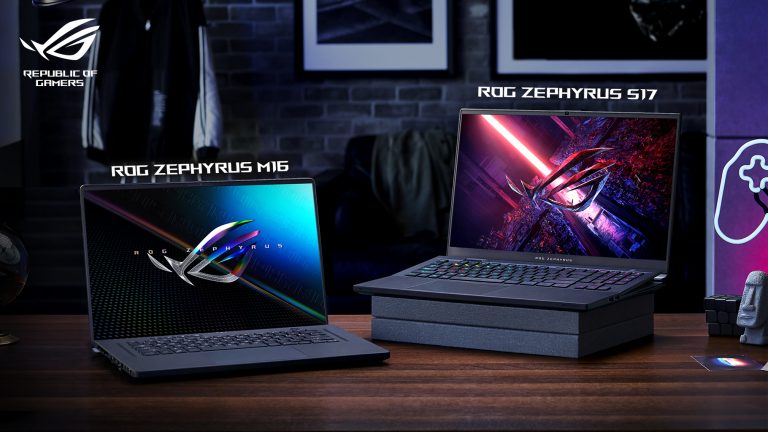 Asus has revealed the new Zephyrus M16 and Zephyrus S17 gaming laptops, which are fuelled by the latest RTX 30 series GPUs, alongside Nvidia’s launch of the new RTX 3050 and RTX 3050Ti laptop GPUs. Both laptops feature 11th-generation Intel processors and high-end specifications.

The Zephyrus S17 laptop is the more expensive of the two. It has a rising keyboard that helps with airflow and cooling, and it has a classic ‘Zephyrus’ look.

The Zephyrus M16 offers a 16-inch touchscreen in a 15-inch form factor with slim bezels for those looking for a smaller gaming laptop. The 16-inch screen on the Zephyrus M16 is a WQHD, IPS-level display with a 165Hz refresh rate, adaptive sync, and 100% DCI-P3 coverage.

The Zephyrus M16 is kept cool by ROG Intelligent Cooling, and it has a six-speaker setup with dual force-canceling woofers for better sound quality. Dolby Atmos is supported by the laptop. The three-dimensional microphone array records direct audio, and two-way AI noise cancellation eliminates background noise.

The Asus ROG Zephyrus M16 also has a 90Whr battery that promises to have up to 10 hours of video playback and can be charged to 50% in 30 minutes thanks to quick charging technology.

The Asus is still keeping the pricing for the new Zephyrus as suspense. However, speculations say that the pricing for both laptops won’t differ much but surely will be lie in the premium segment pricing.

Also, it’s been said the pricing can differ depending on the location. We will be updating you as soon as something gets confirmed by Asus.