Discord backs away from crypto after Internet yells at its CEO

Discord CEO Jason Citron teased integration between the gaming-focused chat platform and Ethereum in a tweet earlier this week, igniting a firestorm. 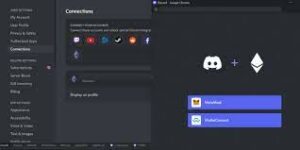 Discord has no plans to integrate with Ethereum wallets

The debate surrounding cryptocurrencies and blockchain collectibles like NFTs, many of which run on Ethereum, has heated up recently, and Citron’s tweet appeared to be the tipping point.

“Probably nothing,” the CEO said in a tweet on Monday, accompanying a screenshot of the Ethereum wallet’s Discord integration. While crypto enthusiasts reacted positively to the tease, the reaction elsewhere was fast and harsh. Many on social media pledged to cancel their paid Discord Nitro subscriptions if the network embraced crypto, and Citron’s tweet received thousands of reactions and quote-tweets.

The criticism was so strong that when Discord sent out a notification to members this week offering a free month of Nitro upon signup, a popular tweet advised people not to take advantage of the offer, speculating that it was a cover for Citron’s disastrous Bitcoin post.

Discord appears to have taken notice of the complaints. Citron emphasized in a tweet on Wednesday night that Discord has no plans to integrate with Ethereum wallets at this time.

“Thanks for all the perspectives everyone,” Citron tweeted. “We have no current plans to ship this internal concept. For now, we’re focused on protecting users from spam, scams, and fraud. Web3 has lots of good but also lots of problems we need to work through at our scale. More soon.”

Discord is in an unusual situation because of its crypto and NFT efforts. Many projects in the NFT sphere and beyond run popular Discord servers with tens of thousands of users, thus crypto is everywhere on Discord. Discord is where people buy NFTs, and servers are where communities are run.

Many cryptos and NFT scams, on the other hand, are run from Discord, with servers shutting down overnight when scammy devs decide to cut and go. Even without Ethereum wallet integration, it’s difficult to envision Discord ignoring all of that for much longer. According to Citron’s tweet, Discord is working on fraud protection tools.

The Discord incident, moreover, demonstrated how entrenched the battle lines in the culture war over NFTs have become. In this booming market, investors are making millions, and video game firms are all making overtures toward incorporating NFTs into their future goods, most likely as a result.

At the same time, many video game players and individuals who are interested in video games dislike them, either because of the environmental impact of proof-of-work tokens on Ethereum or because they believe blockchain collectibles are a gimmick-based on magical thinking or both.