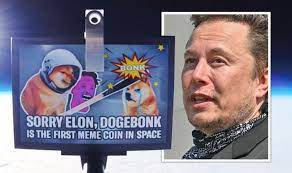 DogeBonk claims to be the first crypto in space

DogeBonk claims to have defeated Elon Musk’s DOGE-1 rocket mission to become the first meme coin to reach space. On December 15, the makers of the new cryptocurrency used a stratospheric weather balloon to launch Dogebonk into space, a feat that was afterward webcast to the “BonkSquad” – DogeBonk supporters — as proof.

The event soon gathered traction on Twitter, with community members using the hashtag “SorryElon” to make lighthearted digs at the Tesla and SpaceX CEO. Of course, this was a weather balloon that flew to the edge of space, but Musk’s rocket is aiming for the moon, so the scope is a little different, but it’s still a great, cheeky reference. DOBO, the cryptocurrency’s native token, was used to fund the project by DogeBonk’s community.

DogeBonk, which was resurrected from hibernation by a motley collection of anonymous decentralized finance (DeFi) veterans, has amassed a substantial audience in a short period, allowing the meme coin’s developers to generate funds for the weather balloon launch project.

The following is a tweet from the team:  “Sorry Elon, but we beat Dogecoin as the first meme coin in space. Watch us prove it tomorrow on our stream. DogeBonk is the first crypto in space. Ain’t too late to join us though, truce?”

The launch of the meme coin was followed by a banner captured by an onboard camera depicting the Dogebonk meme “bonking” a Dogecoin emblem. In the backdrop, there’s also an animated depiction of Elon Musk crying.

Stunts included a giant billboard in Times Square, a virtual “Bonkscars” awards show on Twitch, a custom DogeBonk minigame, a state-of-the-art chatbot trained on the telegram conversations of community members, and winning “Meme of the Year” on ‘r/memes,’ a subreddit with more than 17 million subscribers.

According to CoinGecko, DogeBonk is a community-led project on the Binance Smart Chain Network with a native currency called DOBO that has increased in value by 49.5 percent in the last week and is currently valued at $0.000000114633 (approximately Rs. 0.0000087).

SpaceX, led by Elon Musk, will launch the “DOGE-1 Mission to the Moon” in the first quarter of 2022, with the business accepting DOGE as payment. The dogecoin-funded mission was announced by Geometric Energy Corporation, with DOGE-1 representing a 40-kilogram cube satellite that flew as a payload on a Falcon 9 rocket.