Due to South Korea’s Economic Requirements, Samsung’s Heir was Pardoned.

The South Korean government claims that Jay Y. Lee, vice chairman of Samsung Electronics, needed to be pardoned by the president in order for the biggest chaebol in the nation to assist stabilise the economy. Lee was involved in a 2016 political scandal.

According to bloomberg news, the Korean government declared in a joint press release from its ministries that Lee Jae-yong, vice chairman of Samsung Electronics, “shall be reinstated” in an effort to combat the economic crisis by reviving the economy.

In February 2017, Lee, 54, also known as Lee Jae-yong in Korea, was detained on suspicion that he had assisted Samsung in paying millions of dollars in bribes to numerous entities connected to a presidential advisor.

The goal of the bribery was to get support for a proposed $8 billion merger of two Samsung Group companies. Lee was found guilty of perjury, embezzlement, concealing assets outside of the country, and being one of five Samsung executives who paid Park Geun-hye, the former president of South Korea, bribes totaling $6.4 million in August 2017.

The quick trial and decline from favour didn’t persist for very long. At an appeals hearing in February 2018, Lee’s sentence was reduced by half, and significant bribery and embezzlement charges were “deferred,” 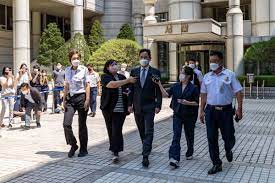 allowing him to get out of jail after only six months. The decision, according to a National Assembly member at the time, “proved once again that Samsung is beyond the law and the court.”

Lee’s appeals led to a fresh trial in early 2021, where he was condemned.