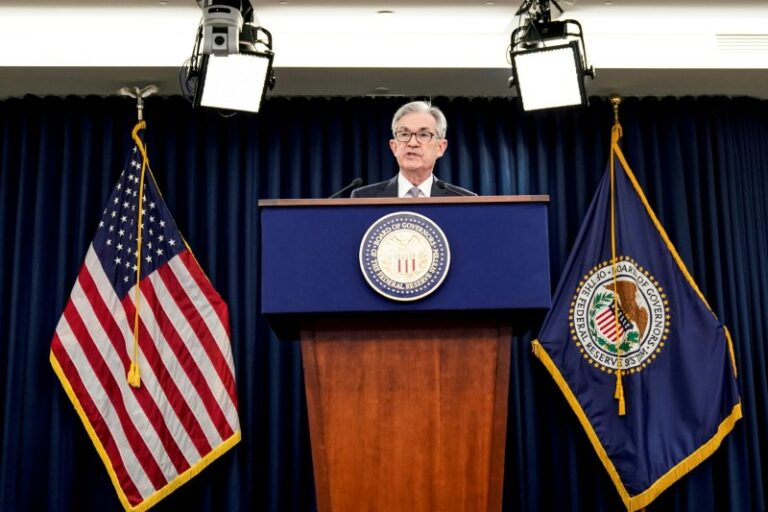 Wall Street’s main indexes suffered heavy losses on Friday and the benchmark 10-year US Treasury bond yield fell sharply ahead of the weekend. It makes it difficult for the dollar to outperform its rivals.

Ahead of IHS Markit’s preliminary January Manufacturing and Services PMI surveys for Germany, the euro area, the UK, and the US, the greenback is holding its ground with the US Dollar Index posting modest gains above 95.70. The Federal Reserve Bank of Chicago’s National Activity Index and the Federal Reserve Bank of Dallas’ Manufacturing Business Survey will also be featured in the US economic docket.

Investors are looking to the Fed for more clarity on the future path of interest rates after data last week showed U.S. inflation rising to near forty-year highs.

Jerome Powell is expected to indicate that the Fed will wind up its bond purchasing stimulus program on schedule at its March meeting. They raise interest rates by a quarter-point from current levels close to zero at the same meeting.

With markets already pricing in roughly four rate hikes, this year investors will also be focusing on what the Fed says about its almost $9 trillion balance sheet.

Markets currently expect the Fed to start trimming the balance sheet later in the year as a way to tighten monetary policy. The minutes of the Fed’s December meeting indicated that officials held lengthy discussions about reducing bond holdings.

Any indications that the balance sheet could be shrunk faster than in the past could extend the selloff in Treasuries and tech shares.

Tech giants Microsoft, Apple, and Tesla are among the big-name companies due to report in what will be a hectic week of earnings results. With investors looking to separate pandemic success stories from fundamentally strong companies.

FAANG darling Netflix (NASDAQ: NFLX ) tumbled over 20% on Friday, weighing on the S&P 500 and the Nasdaq after it forecast new subscriber growth in the first quarter would be less than half of analysts’ predictions.

Microsoft, which reports Tuesday, is expected to report quarterly revenue of more than $50 billion for the first time, according to data compiled by FactSet. Tesla and Apple, reporting Wednesday and Thursday respectively, are expected to post record profits according to FactSet.

Markets look set to remain turbulent in the coming week with investors focused on the Fed and earnings.

In a continuation of the tech selloff that has pushed the Nasdaq into correction territory. Wall Street’s main indexes closed sharply lower on Friday. The S&P 500 and the tech-heavy Nasdaq posted their largest weekly percentage declines since the start of the pandemic in March 2020.

Tech companies largely benefitted during the pandemic and saw their shares soar over the last two years. But tech and growth stocks have been hard hit since the start of 2022 by a rapid rise in Treasury yields on the back of expectations that the Fed will hike interest rates aggressively to combat high inflation.

Higher rates can hurt tech companies with high valuations based on the prospect of future profits.

On Thursday the U.S. is to release advance data on the fourth-quarter gross domestic product with economists expecting annualized growth of 5.2%. Expectations have been pared back in recent weeks as rising coronavirus cases, driven by the Omicron variant hit economic activity.

Some economists are worried that the increase in jobless claims along with the sharp drop in December retail sales could be an indication that the economy is losing momentum. But this is unlikely to stop the Fed from hiking rates in March.

The Eurozone’s largest economy Germany is to release fourth-quarter GDP data on Friday, along with France and Spain. The figures will show the impact of the Omicron variant on the economic recovery. That is ahead of GDP data for the bloc the following week.

The Eurozone is to release PMI figures on Monday which will show how economic activity fared this month.

The U.K. is also to release PMI data on Monday, and while service sector activity slowed sharply in December amid the Omicron surge, other data since then has indicated that economic activity has begun to rebound. The data is expected to show a slight uptick from December and for now. The Bank of England still appears to be on track for another rate hike in February.