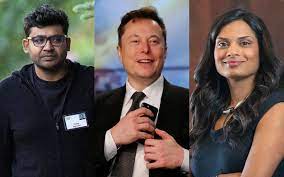 After the pranksters named Ligma and Johnson went over the internet for their false play of being sacked by the new owner, we get the real news of the fired executives. The company’s former chief executive officer Parag Agrawal, chief financial officer Ned Segal, and chief legal officer, Vijaya Gadde were fired when Musk assumed control of it late on Thursday. The conflict that existed between Agrawal and Musk for about 15 months explains why he was let go. Gadde had previously come under fire from the Tesla CEO on his Twitter account since she had a hand in the decision to remove the former president Donald Trump off the platform.

Musk was said to desire to reduce Twitter’s employment by 75%. Even though Musk later denied making the alleged claim, the other Twitter employees are not comforted by the idea of losing four executives on a Thursday night. Even Biz Stone, a co-founder of Twitter, commented on the changes.

Thank you to @paraga, @vijaya, and @nedsegal for the collective contribution to Twitter. Massive talents, all, and beautiful humans each!

The three of them were still better off leaving the organisation. The CEO, Parag, joined the business only a year ago, yet he still owned roughly 155,000 shares. On the market, it generates roughly $8.4 million. Similar results were obtained by Segal (406,000 shares valued at $22 million) and Gadde (642,000 shares valued at $34.8 million). The business tycoon Elon Musk paid $54.20 for each of them. Most of that money will go to them until they find a new workspace.

They also receive “Golden Parachute Compensation” per the merger agreement approved by shareholders in addition to this. Consequently, they receive $73,000 in health insurance and their yearly base wage. For Segal and Gadde, the annual pay is $600,000. For Parag, it is $1 million.

Why were they sacked?

According to media reports on Saturday, the key employees were fired to avoid paying out huge severance packages and planned additional layoffs for as soon as Saturday to dodge stock grants that were due on November 1. He had claimed that they had misled him and Twitter’s investors over the prevalence of fraudulent accounts on the site. The executives had the potential to receive parting compensation totalling almost $122 million, according to research company Equilar.

What internet got for us?

On this subject, we could find a variety of intriguing web opinions.

As stated by Rich Greenfield, the TMT analyst at LightShed, The Information (@theinformation) published an article with the title “Musk Fired Executives For ‘Cause,’ In Apparent Attempt to Avoid Payouts.”

Why is nobody writing about the fact that @elonmusk fired top Twitter execs “for cause,” preventing their unvested stock from vesting as part of a change of control@paraga @nedsegal & other top execs did an AMAZING job for shareholders holding Musk to $54.20 agreement he signed pic.twitter.com/1gEjAyN4xH

Musk fires execs for "Cause" in apparent attempt to avoid payments

According to the Times, who cited unnamed persons who know the situation, the cuts may start as soon as this Saturday.