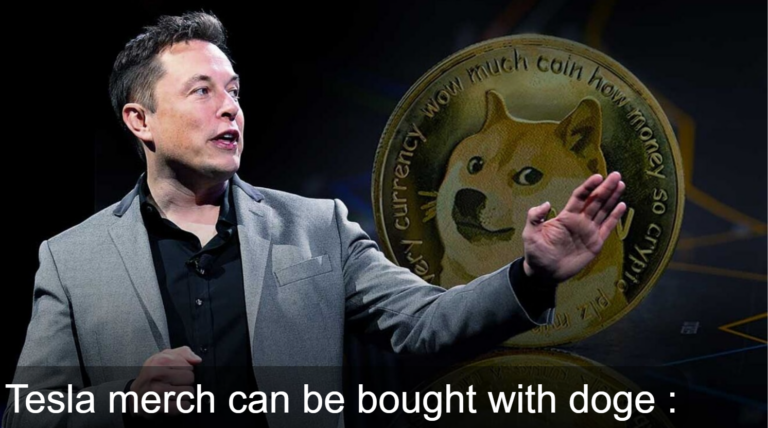 Elon Musk tweets : Tesla merch can be bought with doge, soon SpaceX merch too Dogecoin (DOGE) is a cryptocurrency that was launched in 2013 as a humorous alternative to more standard cryptocurrencies such as Bitcoin.

Elon Musk has made a tweet regarding tesla as well as doge for the very first time after his recent tweet of will doge accept tesla and here is he is saying that tesla will make some merchandise buyable with doge and see how it goes. So, In this easily some of the merchandise for tesla car and some of the merchandise like inbuilt sensors or seat covers or anything available in any car showroom which you can buy with dogecoin.

Musk revealed on Friday through Doge tweet that Tesla merchandise may now be bought with Dogecoin. He also said that Dogecoin would soon be able to be used to purchase SpaceX items. Doge has seen a tremendous rise and a rapid increase of more than 20 percent and is still constantly raising after his tweet.

Tesla merch can be bought with Doge, soon SpaceX merch too

The Tesla website’s Dogecoin-eligible goods include a Dogecoin icon next to the order button.

Dogecoin prices are now nearing cycle lows and at levels not seen since April 2021. The current price is around 50% lower than where it was at the end of the year and far lower than the all-time high of 0.7400 attained in 2021. As of right now, the price is 0.0844.

Customers will require a Dogecoin wallet to make Dogecoin purchases. When you pay with Dogecoin, the payment page will display the address of your Tesla Dogecoin wallet as an alphanumeric code as well as a QR code. Following that, it will be able to connect to the customer’s Dogecoin wallet and transfer the cryptocurrency.

Tesla said that it is the buyer’s responsibility to ensure that the right quantity of dogecoin is transmitted to Tesla’s wallet at the time of the transaction. It also said that customers are responsible for the transaction expenses associated with the usage of dogecoin.

Dogecoin (DOGE) is a cryptocurrency that was launched in 2013 as a humorous alternative to more standard cryptocurrencies such as Bitcoin. Memes inspired both the company name and the Shiba Inu insignia. Unlike Bitcoin, which was meant to have a limited supply and is mined at a rate of 10,000 new coins per minute, Dogecoin has no fixed limit on the total number of coins that may ever be made.

Dogecoin (sometimes spelled “doj coin”) has been described as a “meme coin” that is treasured by its community despite its low value throughout most of its life. This changed in 2021 when DOGE overtook Bitcoin as the biggest cryptocurrency by market capitalization. Even though a single coin is only worth a few cents, the overall value of the currency is expected to exceed $80 billion by 2021.