Eminem can be considered as one of the greatest artists of all times. His rap verses make us all feel and understand his passion towards the art form he is dedicated to. Having said that, the rapper is all set to launch his first NFT collectibles, ‘Shady Con’, which will be in the form of a digital festival. The artist’s fan will be able to get a chance to own an NFT collectable from Sunday (April 25), 11:30 BST (6:30 ET) on NFT marketplace Nifty Gateway.

According to the description provided by the rappers website, this collection “will feature a variety of Eminem-approved NFT collectibles” and will also feature some “original instrumental beats produced by Slim Shady himself specifically for this release.” It says further, “The tracks will be made available only as part of the limited-edition and one-of-a-kind NFTs…But this only scratches the surface of what’s coming this weekend!”

This event will prove to be a one of a kind opportunity for the artist’s fans to get their hands on the original and one of a kind beats that the rapper produced for this event specifically. It will also incorporate some of the NFT action figure sets that include the artist and rapper in one of his most iconic outfits. 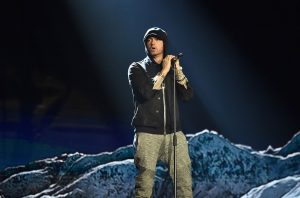 Eminem said that, “I’ve been collecting since I was a kid, everything from comic books to baseball cards to toys, as well as every rap album on cassette I could get my hands on.” He further adds, “Not much has changed for me as an adult…I’ve attempted to re-create some of those collections from that time in my life, and I know I’m not alone. I wanted to give this drop the same vibe of, ‘Oh, man I gotta get just that one or maybe even the whole set!’ It’s been a lot of fun coming up with ideas from my own collecting passion.”

NFT stands for non-fungible token, which is a unit of data stored on a digital ledger called a blockchain. This certifies that a digital asset is to be unique and then is not interchangeable. The NFT (non-fungible token) can be used represent various digital items such as photos, videos, audio, and other types of digital files.

The year 2021 saw an increased trend in the usage of NFT (non-fungible token). This entire event is said to be a combination of blockchain technology, creative enthusiasm and pandemic doldrums. This even will be inspired by Eminem’s passion as a collector of vintage toys, comic books and trading cards. This habit can be traced back to the artists childhood days.

NFT is being used to now days to commodify digital assets in the field of art, music, sports and other popular entertainment. The market value of NFT has been reported to triple in the year 2020 and has crossed the valuation of $250 million. Most of the NFTs are a part of Ethereum blockchain.

Along with Eminem, a lot other artists from the music industry have shown their interest in the NFT. Some of them are Grimes, The Weeknd and Kings of Leon. The artwork given out through NFT is similar to the autographed items. With all such items involved, the market value of NFT is skyrocketing.