After fully recovering from China’s crackdowns, the Ethereum mining hash rate has set a new all-time high (ATH). On Sunday, the ETH network hash rate set a new all-time high, with an average daily hash rate of 715k GH/s. Nodes require a lot of computational power to add transactions to the blockchain because Ethereum currently utilizes a Proof of Work (PoW) consensus mechanism. The overall computational power on the network is measured by the mining “hash rate.”

Here’s a graph that shows how the metric’s value has changed over time: 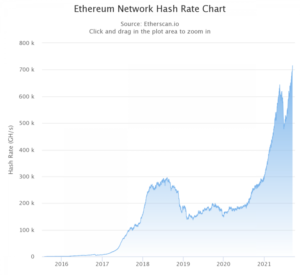 Before this recent upswing, Ethereum’s hash rate peaked on 20 May at around 643k GH/s, as shown in the graph. In June, however, the metric’s value had plummeted to barely 477k GH/s.

What Caused The Ethereum Hash Rate To Drop?

The network hash rate was roughly 618k GH/s on June 8th. Only 16 days later, the value had plummeted to the previous low point. China’s mining crackdowns are to blame for the drop. The country’s stance on cryptocurrencies was repeated in May, causing a market-wide price fall. Shortly after, the country began cracking down on mining centers, forcing miners to shut down their activities.

The crackdowns caused a drop in the statistic because China accounted for a large portion of the world’s hash rate. A number of Ethereum miners sold their equipment on the internet and left the industry. These miners were selling RTX 3060 GPUs for as little as $270 on certain prominent platforms.

Other miners emigrated to other countries. The hash rate began to rise again as they began relocating and restarting operations. Since ETH mining has recently become rather profitable, more people have stepped in during the period of low hash rate, and the metric has now surpassed its prior ATH after recovering from the crackdowns.

The following graph depicts the price of ETH during the last three months: 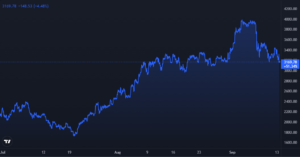 Since hitting just below $4k last week, Ethereum’s value has been declining. It’s uncertain where the price will go next, but the current market movement appears to be negative, at least for the time being.