Elon Musk had promised that his Boring Company will one day ferry passengers through the means of tunnels, directly underneath the Las Vegas Convention Center. The promise has involved cars which would move on magnetic rails, at speeds as high as 124mph. 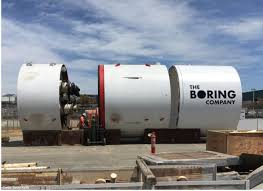 Now, it seems that the firm has delivered on the promise, partially anyway. A service was being tested by the company this week, and will consist of Electric Vehicles (EV) from Tesla (also owned by Elon Musk) moving at speeds around 40mph, in underground tunnels.

The idea behind the concept is to reduce the congestion on roads, and to make travel faster and easier, by means of a seamless underground connection between the major spots in the city. The cars in these underground tunnels will be controlled and moved around through automated magnetic rail systems.

Hailing a Taxi Under the Ground

The system under test this week had users hailing cabs the traditional way (“Taxi! Taxi, wait!”), instead of through apps. The tunnel system will be connecting two stations at different points of the LVCC. The tunnel is some 0.8-mile long, and is known as the LVCC Loop. Many user videos are emerging, providing providing insight into the system’s functioning.

Only a few dozen Tesla EV-type cars, namely some  Model 3 and Y sedans, as well as some Model X SUVs, were used as of now. The small number of cars meant that the users participating in the trials had to wait around 3-5 minutes, to get a ride that’s just around 90 seconds long (as opposed to the 45-minute long walk that one has to opt for above ground, as of now).

The company has revived a significant grant of $48.6 million, by the Las Vegas Convention and Visitors Authority (LVCVA), to come up with self-driving EV models, which will be able to navigate the Loop at higher speeds, nearing 150mph. This will be a massive improvement upon the current 40mph speeds, which human drivers are forced to stick to, due to the narrow tunnels.