EV maker Rivian planning to bring IPO and raise around $10 billion Rivian is backed by Amazon and Ford.

An Electric Vehicle startup Rivian planning to release its Initial public offering. In this IPO company expects to raise around $9 billion to $10 billion.

Rivian is an American electric vehicle automaker and automotive technology company. It is founded in 2009. Rivian is based in Irvine, California, US. Its manufacturing plant in Normal, Illinois, and other warehouses and factories are in Palo Alto, California, Carson, Michigan, England. Rivian mainly manufactures electric sport utility vehicles (SUV) and pickup trucks. These vehicles are designed for both on-road and off-road driving. Rivian is backed by Amazon and Ford. According to Bloomberg estimated the company’s valuation is nearly $28 billion in 2021.

Earlier, they sell their share at a price band of $57 to $62 per share. After an update in filing to the U.S Securities and Exchange Commission on Friday, Company revised the price from $72 to $74 per share.

At the top end of the revised range, the company will have a market capitalization of $63 billion, according to Bloomberg’s calculation. Accounting for employee stock options and restricted stock units, the company’s fully diluted value would be around $71.3 billion.

In January this year, Bloomberg shows in their report that Rivian was valued at around $28 billion.

The company will raise around $10 billion from this public offering and it would be the seventh-largest U.S. IPO on record.

Rivian Morgan Stanley, Goldman Sachs, and J.P. Morgan are the lead underwriters. Rivian will be listed on NASDAQ under the symbol “RIVN”. 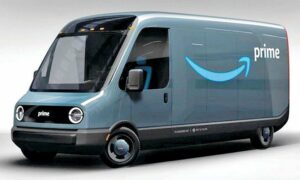 Rivian will see as a Tesla competitor in the market. Rivian will also face competition in both the consumer and commercial van markets.

Last week Amazon reveals that they acquired a 20% stake in Rivian. Now the value of their equity investment is around $3.8 billion. A separate filing by Rivian stated that Amazon has invested more than $ 1 billion in Rivian to date.

Ford Motors holds around a 12 per cent stake in Rivian, according to sources.

After this IPO, the valuation of Rivians will be among the electric vehicle startups companies and recently public companies in the U.S. like Lucid, Fisker, Lordstown. It would be slightly less valuable than a traditional automotive firm such as Ford, which is also an investor in Rivian.