Everything About Non-Disclosure Agreements – NDA for Agile Software Development

NDA indicates a Non-Disclosure Agreement, which is an inevitable stage of app development. It’s majorly a legal document that safeguards the app and the creator’s ideas. This is how it impedes the condition of being leaked to competition.

Moreover, it also provides the creators with an absolute peace of mind and confidence across the process. On the other hand, NDA for Agile software development is a necessary thing you should think of during your first app creation.

Overall, it will provide you a good sense of peace and confidence that your idea will stay safe during the ongoing preparation. Therefore, NDA for Agile software development ensures both confidentialities of your idea and helps eliminate any potential conflicts. So, let’s know more about NDA!

What does NDA mean?

Emerging app development in the latest technology like Ruby on Rails with the help of non-disclosure agreement is intended to utilize sharing software business trade secrets with contractors, consultants, investors, and anyone who has instant access to your company’s secretive information.

Therefore, such data could incorporate your unpublished design definitions, computer code, specifications, flowcharts, and flow diagrams. Moreover, it may also include algorithms, data structures, customer lists, user documentation, and patent applications. Hence, you must utilize the Software Beta Tester NDA if you are offering software to beta testers.

What should NDA incorporate?

There will never be a stringent template to follow while writing an NDA. So, as long as it consists of everything you need it to. Various people often make such the mistake of leaving things out, leading to an NDA being taken benefit of by a stickler.

Some of the most significant things to include in an NDA are shown below:

By incorporating every aforementioned thing in an NDA, you will set your brand-new mobile app up for long-term success.

How does an NDA safeguard your mobile app idea?

The best way to protect such properties is by typing them into an NDA. You must know that this document enables a company to share its intellectual property details with those whose information is required without indulging in the risk.

If an organization possesses a top-notch product idea, which needs to be safeguarded, the NDA ensures that the receiving party doesn’t reveal the idea to any competitors.

Going back through various client relationships, most importantly, the best ones, almost nobody requested to put an NDA. However, although they didn’t ask, it will be necessary to put an NDA in place prior to starting a project.

The NDA agreements offer complete protection for the intellectual property-related confidential details of the clients.

Therefore, to streamline and facilitate the mobile app creation process, companies should do their best to offer legal and form documents in order to evade any potential challenges. Additionally, you can use NDA by yourselfwhile signing a covenant.

While transforming your idea into a leading mobile app, there will be a plethora of people in your vision. So, teamwork will be a significant element, which can maintain the notion of moving in the correct direction. However, the plan could be quickly derailed if the adequate steps are not applied with an NDA. The following group of people must be needed to sign an NDA.

There will be prolonged hours of testing before an app can be released. If you want to ensure that everything is working smoothly, the quality analysts need to know major details about the app.

It’s not possible to move forward without saying! Those people who are in the process of building an app, know lots of things about how an app works, and what’s involved here. So, make sure that they remain credible while developing an app.

Is there anyone aiding in the app designing? So, there will be several valuable information passed in those meetings. A safeguarded app design will make sure that downloaders get an unrivaled experience with your app.

If you are working with a professional Agile software development company, a single NDA signed in the name of that organization is necessary. Therefore, it will be actually sufficient to protect your choices. Moreover, it can cover all the employees and contractors deployed by that organization to access any crucial information.

You must sign an NDA while talking to investors and entering into a premium business deal. The key elements of the Non-disclosure Agreements will be the agreement’s term, identification of the parties, the definition of the confidential things, and the major exclusions from confidential treatment.

For your general information, most NDA’s have an expiry date. But, such an expiration date is decided mutually between the parties. After that, they can either renew or discontinue as per the requirement. 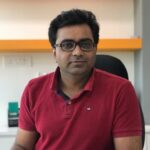 Chandresh Patel is a CEO, Agile coach and founder of Bacancy Technology. His truly entrepreneurial spirit, skillful expertise and extensive knowledge in the Agile software development services has helped the organisation to achieve new heights of success. Chandresh is fronting the organisation into global markets in a systematic, innovative and collaborative way to fulfill custom software development needs and provide optimum quality services.