Excitement surges as the final design of Tesla Cybertruck takes the spotlight on Twitter. 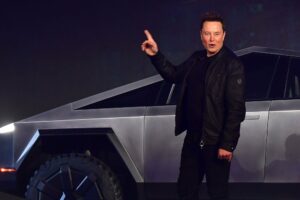 Twitter is surging with excitement as the spotlight shines on the much-awaited Tesla Cybertruck. The final design has got netizens all excited as Musk reveals how the EV opens. An EV opening is a normal affair when we look from a normal point of view. But we are talking about Tesla. Ergo, surprises are part of the deal. And the twist to the tale is that the Tesla Cybertruck will not have the conventional door handles. In place of the door handles, we have a truck that will loyally recognize the owner and open the door without any manual effort. Seems like Musk never runs out of tricks in his magic hat. And for one thing, we know that Musk knows how to tweet in style(and also the other way around).

No Doors To Be Opened

Tesla is opening new doors of opportunity with zero doors to be opened. (The word you are looking for is irony). The Tesla Cybertruck is the much-awaited addition to the electric pick-up segment that will give out all the promises of taking the EV world by storm. And with the surprisingly awe-inducing features, the truck has implied that the storm is already brewing.

The Cybertruck idea was first revealed by Tesla back in 2019 and it seems like it is around the block of completion. Musk has always kept the crowds on the tip of excitement by chipping in with brilliant details about the truck that will be quite the Tesla truck with technology shaped to innovate and inspire. Who will not be waiting for a Cybertruck with the credentials of a sports car? This is in addition to its brilliant pick-up abilities that can easily scour any harsh terrain. From the details we have, it is very much evident that Tesla is on check with path-breaking technology. As per the snippets of information given by Musk, the truck will be of the same design as it was revealed in 2019 with slight alterations here and there.

In end, we kept production design almost exactly same as show car. Just some small tweaks here & there to make it slightly better.

Having all four wheels steer is amazing for nimble handling & tight turns!

As Tesla Cybertruck becomes the reigning highlight of the Twitter town, netizens have hit the highest point of their excitement meter. While most are intrigued by the unique design of the truck, a few others are put off by the eccentric shape. Check out these responses on Twitter as Cybertruck soon made it to the trending list on Twitter.

You can always have your own version. All you need in place of a few dollars are some building blocks and imagination.

whenever i'm feeling a little down, this cheers me up. anybody else? #tesla #cybertruck pic.twitter.com/ytT88qbqbV

Inflation is all about cars. Prices going higher. Demand much bigger than supply. Huge increase in oil costs driving more to EVs. Tesla is sold out of cars and continues to ramp production. When giga Austin opens. Game over. #cybertruck and semi are beyond game chargers. $tsla

Now that is a typical Elon Musk dialogue. If by flop he means a few million in his pockets, then sure. After all, it is the effort that matters.

To be frank, there is always some chance that Cybertruck will flop, because it is so unlike anything else.

I don’t care. I love it so much even if others don’t.

Other trucks look like copies of the same thing, but Cybertruck looks like it was made by aliens from the future.

Aliens aren’t that bad a deal after all.

To be fair, it does look like it’s made by aliens 👽 #cybertruck https://t.co/e4P5xVqWzR

Did we say a few million before? Perhaps it is time to take away that ‘few.’

@Tesla #cybertruck reservations are above 2.5 million.

Probably shocking nobody who owns a Tesla.

Now here is an interesting game.

Can I buy a #Cybertruck with Dogecoin!!? @elonmusk

Are we imagining an ideal situation where there is no vision hindrance?

@elonmusk Can we get an update on how the Cybertruck will clear Rain, Snow and other various debris from the windshield? I know the obvious answer would be wiper blades but no pictures have been shown with them… #Cybertruck #tesla

People who don't appreciate the sharp design of the #Tesla #cybertruck are.. missing the point. 😐☺️ pic.twitter.com/09CD4a6LDW

How about a wifi camera link?