Facebook and Twitter are back on the trending lists yet again, courtesy of Donald Trump. After quite some time, Trump has managed to turn some heads although his lawsuit is devoid of any head and tail. Apparently, the former president’s displeasure at being banned from the social media platforms manifested in the form of class-action lawsuits. The lawsuit is targeted at Facebook, Twitter, and Google. Although a lawsuit sounds quite serious, the fact that Trump is backstage of the same lightens the situation. While the majority of the people dismissed the claims as preposterous and baseless, few of the Trump supporters saw this as an opportunity to call out the companies on the supposed shadow banning and unfair treatment of the conservatives. The fact whether that is fair or unfair is another question altogether. 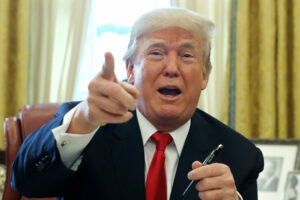 Will The Law Suit Trump?

The initial answer to that question will be an easy no with a shake of the head. Because Donald Trump has a reputation for wonderfully frivolous ideas that are often just ideas and nothing more. Most of the legal experts are of the firm opinion that the claims posed by Trump are rather baseless and will not see success in court.

Trump is definitely justified in being displeased about the banning. However, it will be wise to think about why the person concerned was locked out of all the platforms concurrently. Although unfair coincidence seems like a pretty good answer, people might disagree since all of them were witnesses to the mess caused by the same person concerned. Going back to the pages of a not-so-old past will only have an adverse effect.

If you want a small briefing about the lawsuit. Here you go. It basically tries to establish that the First Amendment rights of Trump were violated by the platforms as they banned the former president. The lawsuit also proposed a strike down of Section 230. Only time can tell who will be struck down eventually. Though many will have an answer ready on the tip of their tongues.

Ever since the news about the lawsuit surfaced, Twitter users are going all out with the memes. Most of them have dismissed the claims of the lawsuit as an absolute blunder without any rhyme or reason. While some are of the opinion that this is the most stupid thing ever done by the former president. Here is a set of memes and responses from Twitter.

This is the dumbest thing Trump has ever done. It’s wonderful.

I remind you from personal experience that when you sue somebody you have to give a multi-day deposition on anything relevant to the topic…in this case, like your role inspiring the 1/6 Coup https://t.co/oUGBrWdgmN

Memes do have a tendency to be insanely funny.

BREAKING: former President Donald Trump announces lawsuits against Facebook, Twitter and Google, over censorship – as his team of lawyers cheer him on.#IndictTrump pic.twitter.com/QJsaSxXVs3

Well, seems like he needs a reminder about a great many things.

Trump is suing Facebook, Twitter, and Google for violating his 1st Amendment rights by keeping him off their platforms. Someone should remind him that they're private companies to which the 1st Amendment doesn't apply.

A very wise question with an even wiser answer.

Do you think President Trump has a chance of winning his lawsuit against the Big Tech giants Google, Twitter and Facebook?

If only Trump could see all this. But sadly he is not on Twitter. Any resemblance of the statement to a joke is completely coincidental.

Harvard Law prof Laurence Tribe: "The First Amendment's Freedom of Speech and Freedom of the Press Clauses, far from giving Trump any rights vis-a-vis Facebook or Twitter, actually give those companies the right to expel any user they wish." https://t.co/6INFA3NDVl

Even if they won’t let them talk, he is trying his best to make himself heard.

Again, he has got a lot of things backward.

Trump has the First Amendment argument backwards. Facebook and Twitter themselves have a First Amendment right to decide what speech their platforms amplify — a right that includes excluding speakers who incite violence, as Trump has done.https://t.co/hl9aw1cmPE

It is pretty obvious who will have the last laugh.

Well, being mean is not right. But that goes both ways. And looks like the meanness compass points directly to one particular person. You Know if you know.