Fewcents, commonly stylised as Few¢ents, is a pay-per-content portal that helps publishers connect to more users, thereby increasing the readership of their work. Based in Singapore, this fin-tech startup taps the market of people who want to view a premium article or video, but do not want to sign up for a subscription or similar commitment. Thus, it allows publishers to accept payments in instalments for their work, and refers to them as “micropayments.”

Fewcents is used by creators to monetise their articles, videos, and podcasts. Monetisation also happens through sharing revenue with digital publishers. It accepts 50 currencies, and earns additional revenue from its subscriptions and advertisements. Its current clients include Indonesian news site DailySocial, India’s Dainik Jagran (with a readership of 55 million), and streaming video site Dailymotion. It has also built partnerships with Jnomics Media to grow and expand its consumer base in Europe.

The company announced today that it has raised $1.6 million through seed funding. The round was led by Hustle Fund and M Venture Partners. Angel investors from some of the top fintech, ad tech and media companies were also involved. These include Kenneth Bishop (former managing director of Southeast Asia at Facebook), Koh Boon Hwee (former chairman of DBS Bank), and Jeremy Butteriss (head of partnerships at Stripe), among others. 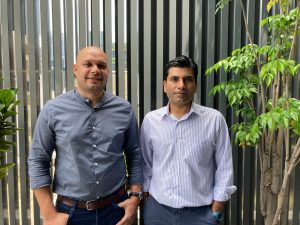 Fewcents was launched in 2020 by Abhishek Dadoo and Dushyant Khare (pictured above). Dadoo is not a newbie when it comes to starting a business, as his previous startup, Shoffr, an online-to-offline attribution platform, was acquired by Affle, a global technology company, in 2019. Meanwhile, Khare spent worked at Google for 12 years, including as director of strategic partnerships in Southeast Asia and India.

According to Dadoo and Khare, the large majority of consumers are only casual users, also known as referred users, and in order to monetise their online traffic, publishers have to rely on advertisements and other similar sponsorships.

Content creators and online influencers are beginning to experiment with micropayments. Other platforms, such as Flattr – Swedish-based microdonation subscription service – lets people make one-time contributions. Meanwhile, Axate, a reading and publishing website, uses a pay-per-article business model. Despite the increasing popularity of this strategy to make monetary gains, publishers continue to debate the extent to which it is effective. In fact, due to this lack of clarity Google decided against launching a tipping feature for its associated sites.

However, Khare continues to voice his support for such tools. According to him, Fewcents can provide deeper data than pageviews, and helps publishers understand the preferences of specific markets and consumer groups, and develop customised bundles of their work. Additionally, Fewcents aims to automatically recommend personalised content bundles for each user.