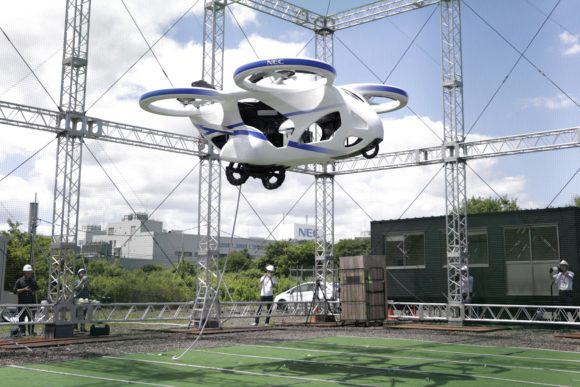 A prototype of NEC Corp.s flying car floats in the air during a demonstration at a testing site of the company's plant in Abiko, Chiba Prefecture, Japan, on Monday, Aug. 5, 2019. Photographer: Kiyoshi Ota/Bloomberg
Home
Tech
Automobiles

Jetpacks are attached to paramedics, countries having police at air level border, and city people going to work through drones. It is the future vision transportation is working on. Advanced Air Mobility (AAM) is a market with full potential, known to be worth $17 billion by 2025.

As cities are getting advanced with upcoming technologies, self-driving cars, and flying drone deliveries are often seen experimenting in real life. Just decades ago, it would have been considered impossible. Now, using the sky for transportation has become attractive for companies.

Asia Pacific Director at Wisk, Anna Kominik said, “We can’t continue to use road transport; 3D mobility is really important.”  Wisk, backed by Boeing Co. and Kitty Hawk, has been testing Cora, an autonomous electric aircraft that takes off and lands like a helicopter, at its base in Tekapo, New Zealand, for four years. Wisk is liaising to get approval for public use of the air taxi, which can carry two passengers up to 100 kilometers (62 miles) at speeds of up to 150 km/h (93 mph). With regulators, including the U.S. Federal Aviation Administration Wisk will be able to implement air taxis for its customers.

Kominik said in a panel discussion on November 5th, “Sixty-seven percent of the world’s population will be cities by 2030, so that ground infrastructure can’t keep up and is costly to overhaul. We have to move to the sky as a resource.”

Delivery to customers will begin in 2023 by PAL-V Internation. The Chief executive of PAL-V International, Robert Dingemanse said that once they complete the required training they will be able to deliver the services to its customers. Further, he added that PAL-V has orders from 15 countries that paid down payments already, along with interest from 193 countries. Kominik didn’t talk about the timetable when first passengers will be able to experience air taxi. She said, “We don’t expect we will be the first to market, we do expect to be the best.”

By 2035, the advanced air mobility market is expected to be valued at $110 billion, and by 2025 the value will be at $17 billion. The values are estimated by Allied Market Research. Also, the report also shows that the 3/4th  segment will be autonomous and the autonomous segment will grow fastest by 2025-2035.

Dingemanse said that he expects the liberty to be used for various applications from policing, observation to health operations in every location. Also, Richard Browing already did train with gravity jetpack. It could be used for several emergencies especially in the military segment. The 317 pounds jet suit can carry a person for around four minutes.

There are many efforts being made to increase the time limit in the air. Browning has already built a data set for the Jetpack’s use in 35 countries. As the industry and technology develop, Kominik says that the ecosystem will be a critical component of the developments.