Plogging started in Sweden by Erik Ahlstrom in 2016. The word is a combination of two other words which are jogging and ‘plocka upp’ which is a Swedish phrase for pick up. This is an eco-friendly movement where people pick up garbage whenever they are out for jogging or brisk walking. This serves both purposes, to take care of one’s health and to also clean up the surroundings.

The concept of plogging was introduced to India by Ripu Daman Bevli. Bevli is an athlete and a fitness enthusiast. Raman started plogging in 2017 in order to stay fit and keep the area around him free from garbage.

In order to make more and more people aware about this concept and such a movement in India, Ripu conducts fitness and cleanliness drives in the form of plog runs from time to time. He also started a ‘Run for clean and fit India’ under which 50 plog runs were organized across 50 cities in the country covering 1,000 kilometers.

Plogging by Erik Ahlstrom was started in similar fashion too. In 2016, Erik would often encounter trash lying on the side of the road without anyone picking it up for weeks. One day Erik himself picked up the trash and disposed it. Eventually, he included this activity in his daily life while running and exercising.

Plogging as a concept rose to fame in India when the Prime Minister of India, Narendra Modi tweeted about plogging at a beach in Mamallapuram while picking plastic litter, bottles and other items. He then went on to encourage people to start plogging in his Mann Ki Baat address for a litter free India.

This motivated many other to follow suite and thus it became a powerful global movement. This movement has been adopted and implemented by fitness and environment enthusiasts all around the world.

Over the past few years, plogging has been immensely popular in Europe, US, South America, Asia and Africa. This activity also has its own share of health benefits. According to Erik Ahlstrom when a person is plogging for just half an hour, they will be able to burn around 288 calories. This sounds like a good option as regular jogging for half an hour will just burn around 235 calories.

Mr Ripu Daman Bevli has been appointed as a Fit India Ambassador for his efforts in plogging. Ripu Daman Bevli said, “By plogging you are actually improving your body’s health and that of the environment. So this is a combination of Fit India movement and Swachh Bharat Abhiyan.” 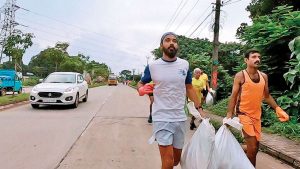 Some of the waste collected during the run are then handed over to local civic bodies. Whereas items such as plastic bottles are handed over to a group of women from rural parts who have undergone skill training. These women transform such bottles into beautiful pieces of art by painting on them, thus showcasing their talent. This has also become instrumental in providing these women with employment opportunities.