FLYX Survey determines that the demand for audio streaming is at an all-time high With 52.2% of people already streaming audio content on a daily basis

Mumbai, March 24, 2021 – FLYX, a one-of-a-kind social streaming networking platform, conducted a unique survey to evaluate audio streaming behaviour of users. With over 550 respondents in India, it revealed how and why audio streaming is gaining popularity.

Did you know that 52.4% of people stream audio content daily?

Titled ‘Are you listening?’, the survey states that while 75.9% of participants streamed both audio and video content, 52.4% of users stream audio content on a daily basis. It was also discovered that 66.2% of respondents preferred audio content for its ease of access.

Music becomes the most preferred audio content. No surprises there.

With YouTube emerging as the most favoured platform with 82% of votes, music automatically became the frequently streamed audio content. While Spotify came a close second with 48% and Gaana took the third spot with 38%, Jio Saavn was fourth with 25%. Speaking about audio streaming platforms being a game changer, Shashank Singh, Co-founder and CEO of FLYX, said: “I strongly believe that this new form of audio consumption and interaction will transform the content consumption experience and the way people engage with each other, while empowering content creators. Our survey certainly reiterates that audio is emerging as the most popular content consumption medium.”

How often do people keep their videos on during work calls?

Only 28.5% of people prefer to keep their video on sometimes during a work call, whereas 26.8% never switch on their videos while on a call. 38.6% of users also found audio to be a more personal medium to use and 27.4% of people liked its non-intrusive nature.

Podcasts: Where does it stand in this time of connectivity?

Although podcasts came in second as a preferred audio streaming platform with 35.7%, users felt audio rooms were more personal and interactive than podcasts. Still being an emerging phenomenon, audio rooms caught the fancy of almost 12% of users.

“The audio rooms specifically will prove to be an excellent storytelling platform for business owners to share their expertise, become more influential, help community-building, serve as a business generation too and a great place to meet potential investors and partners.”, said Shashank Singh, Co-founder & CEO, FLYX. 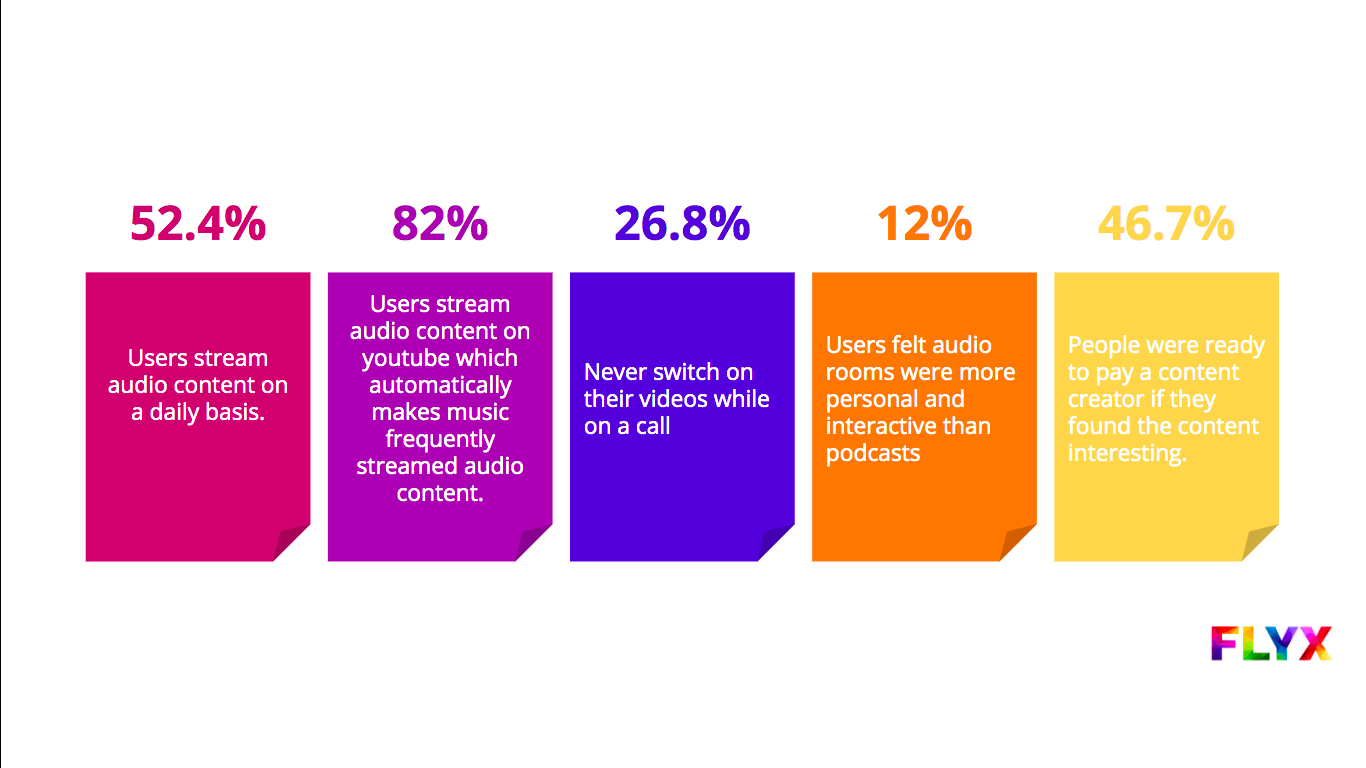 To pay or not to pay: The burning question

When it comes to paying for audio streaming, 45.5% of users said ‘no’, wherein 64.5% of people felt their payment would be need-based. But on the bright side, 46.7% of people were ready to pay a content creator if they found the content interesting.

FLYX undertook this survey in March 2021. The survey was conducted with respondents between the age group of 18-65 years who were students, professionals, business owners and self employed amongst others. The respondents primarily belonged to major cities of India including Delhi-NCR, Mumbai, Bengaluru, Chennai, Pune, Hyderabad, Pune and Kolkata. Of these, 68% were male and 31% were female.

FLYX is the first streaming social network that helps users find what to watch and where to watch, through the use of a unique algorithm that focuses on aggregating reviews from friends, family, and contacts that you trust the most on content across all major streaming platforms.