The mini electric car manufactured by Wuling Hongguang has a battery power of 9.2 kWh with a 120 km range. The four sweater vehicle runs with a single motor by consuming 8.1 kWh/ 100 km.

When the mini EV was released in 2020 the demand was high within the first six months itself. 119,255 units were sold in that half-year. The scores were impressive that this year the EV overtook the Tesla sale by 6,479 units.

Forget competing with the best model in terms of performance, battery range, and premium features, just work on sales. For this Mini EV, the plan totally worked. It is now known as best selling electric car in 2021.

No matter which EV comes into the competition, Tesla still has the upper hand when it comes to quality production. While their US production is doing good, the Models produced in Shanghai were reported to have certain defects.

The mini EV is known as a local product, something cheap and affordable, with no scope of globalizing itself. However, this didn’t apply to Wuling Hongguang’s Mini electric vehicle. It is expected that it will be released globally.

Wuling Hongguang mini EV is going to be released in Europe as Dartz FreZe Nikrob, announces Dartz. This Latvian-based company is popular in Europe for its armored car manufacturing and sales. The mini EV is expected to be sold for 9,999 Euros in Europe. 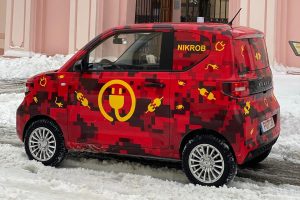 The European version of the Wuling Hongguang electric vehicle

However, the European version will be released with modified features like trimmed leather. This mini is considered the first car to work towards an EV, which the general public can use.

China’s government supports the usage of EV so much as to provide them with a free number plate for their car. In China, it is a big deal to register and get a licensed car number, hence the strategy is seen as an effective one.

Being tiny is not a bad thing after all

It is true that Wuling Hongguang’s mini EV is not perfect and needs more improvements in many ways. Additionally, it is tiny and not suitable for all drivers. But, the public demand turned out to be something else.

Though there is awareness about pollution with respect to passenger cars, the reality is different. Using public transport is not acceptable for many, considering the time-frame of working parent, working student, etc who has multiple lives. A mini EV can save them a lot, in terms of space and money. Not to forget, it also removes the guilt of polluting the environment.

Not even Tesla’s Elon Musk could have predicted the importance of the need of local demand.