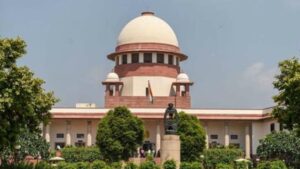 Amazon has finally secured the big win after a bitter legal battle with Future Retail. In the major battle where two of the richest men in the world locked horns, Amazon has finally come out victorious. The world is well past the days of historical battles, but the business domain is no stranger to epic battles that are equally draining with massive casualties. In the following case, Reliance, and Future has suffered the most battle scars. Last year, a restraint was placed on Future Retail by the Singapore Emergency Arbitrator, from going ahead with a merger with Reliance Retail. And the Supreme Court has finally pronounced its judgment saying, that the Arbitrator’s decision still holds and that it should be enforced.

Amazon-Future-Reliance case: Supreme Court rules in favour of Amazon and holds that Singapore's Emergency Arbitrator Award that restrained Future Retail Ltd (FRL) from going ahead with its merger deal with Reliance Retail is enforceable in Indian law.

Jeff Bezos and Mukesh Ambani emerged as rivals as Future Group moved for a merger with Reliance. What resulted was an epic battle between Amazon and Reliance as Amazon contented the decision of Future Group, taking the matter to court claiming that the merger leads to a violation of the terms of their contract. As the Singapore Emergency Arbitrator put a hold on the merger, Amazon took its cue and approached the Delhi High Court to ensure the enforcement of the decision. The single-judge bench ruled in favor of Amazon and even put forth a question as to why it should not go ahead with seizing Kishore Biyani’s assets. Later, Amazon had to approach the Supreme court as the Delhi HC order was put on hold by a bigger Delhi HC bench. And finally, Amazon has emerged victorious. Talking about casualties of the legal battle, both Reliance and Future Group suffered a major fall in shares following the SC order.

The winning point for Amazon was the fact that in 2019, it had entered into a deal with Future Group which prevented the latter from selling its retail assets to anyone who comes under a particular “restricted persons” list of which Reliance was a part. Although Future argued that the failure to deal with Reliance would lead to its liquidation, the argument didn’t stand. With Amazon’s big win, Reliance also loses a chance to strengthen its stronghold within the e-commerce sector.

Here are some reactions on Twitter following the SC order. A good majority of Twitter users aren’t pleased with the apex court’s decision backing Amazon. Most of them view the judgement as a threat to the future of Indian retail. However, there are a few others applauding the decision as well. Let us take a look.

Courts do not care about wealth. Its not going to be affected 99.99% times by anything.

Very bad for retail in India if Future shuts down. I hope they find a way out. Amazon is becoming too strong. A foreign firm having such dominance in Indian retail segment is worrying.

It is high time indian corporates respect international arbitration. the same has been done by government of India by withdrawing retro tax amendments this is necessary for comfort of doing business in India.#amazonatSC

Are you kidding me? The court has to deal with law. It's job isn't to promote Indian or any company. Otherwise how would it be neutral like it is expected to be?

It’s the biggest setback in the history of Retail where lot of people were expected to happen this positively. With Amazon winning the future of Retail is at stake and will add more people to the list of in Unemployment

Biyani went berserk seeeking funds and he is made to kneel by the apex court. Bezos is clever and nailed him with a onesided agreement.

So much for atmanirbhar bharat @PMOIndia You have failed to uphold and save Indian businesses. Wait for elections, I will personally make sure PPL don't vote u guys. Made a big mistake by voting for you. Congress was at least better at such thing. U just lost voters.@nsitharaman