The Federal Reserve said Wednesday that it will halt crisis-driven asset purchases early next year. They setting the stage for three interest-rate hikes in 2022 to help counter the threat of persistently high inflation. The stock market, which was lower as investors braced for Fed meeting news, improved, with the Dow Jones and S&P 500 turning positive. Fed chief Jerome Powell will elaborate on the policy outlook at 2:30 p.m. 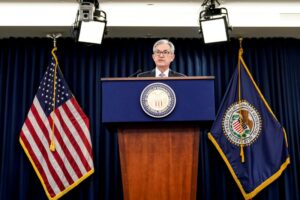 The Federal Reserve, signaling its inflation target has been met, on Wednesday said it would end its pandemic-era bond purchases in March, paving the way for three quarter-percentage-point interest rate increases by the end of 2022 as it exits from policies enacted at the start of the health crisis.

In new economic projections released following the end of a two-day policy meeting. Officials forecast that inflation would run at 2.6% next year, compared to the 2.2% projected as of September, and the unemployment rate would fall to 3.5%.

“Central banks have little choice but to start tightening monetary policy in the majority of cases, as inflation continues to rise to uncomfortable levels, become more widespread, and show signs of becoming more permanent,” Erlam said.

“Omicron posing a greater threat and forcing restrictions may delay the inevitable but not for long as policymakers can`t afford to be complacent.”

Markets expect at least two increases in 2022 on the Fed`s “dot plot” of where policymakers see borrowing costs going.

On Nov. 3, the Federal Reserve announced it would gradually wind down asset purchases from the $120 billion monthly pace. The initial steps down of $15 billion per month would have had purchases of Treasuries and mortgage securities wrap up by June.

But on Wednesday, the Fed elected to speed up its exit from the extraordinary policies it adopted early in the pandemic. Asset purchases will now decrease by $30 billion per month and likely come to an end in March.

That timing is significant because the Fed has long signaled it would hold its key interest rate steady until after it halts its nonconventional balance-sheet expansion. That means interest-rate hikes could be on the table as early as March.

BREAKING: Fed keeps the interest rate on your savings account at 0.01%.

The Feds current plan is wonderful for stocks. Powell is not a hawk and running this right.

After the Fed meeting policy news, the stock market turned higher, after being in the red most of the day. But as Powell’s press conference began, the Dow Jones industrial average was fractionally higher, while the S&P 500 added 0.2%. The Nasdaq composite, which has had a lousy week as investors weigh the implications of a more aggressive Fed, erased losses.

About 58% of the stocks in the S&P 500 rose, with technology and health care companies accounting for much of the gains. Apple rose 1.4%. Eli Lilly jumped 8.7% after giving investors an encouraging update on its financial forecasts and drug development.

Retailers and other companies that rely on consumer spending fell. The slip follows the latest retail sales report from the Commerce Department. Sales rose a modest 0.3% in November but fell short of economists’ forecasts amid concerns that rising costs could crimp consumer spending.

WHAT? YOU THOUGHT I’D LET MARKETS DROP INTO CHRISTMAS? pic.twitter.com/wSfUdyIISI